A few issues after gaining his powers Barry Allen gave Wally West, a costume of his own different from the Flash's in Flash #130, August 1962. Following this Kid Flash would have one of the most dynamic looks in 1960s DC Comics. An updated retread of the Flash's costume, Kid Flash's mask cut at the forehead, letting his hair flow outside, much like Johnny Quick's. His torso and arms inverted the Flash yellow and red theme. This costume has proven so popular, Impulse, Wally West's nephew adopted it too.

Although he gained the suit at a very young age, this is the suit Kid Flash sported when he was a member of the Teen Titans and several other incarnations of the team. Everything about this figure respect the costume as drawn by George Perez. The yellow shirt hinges over his red waist. Kid Flash's hair is part on the left side. His yellow boots end just underneath his knees. The face mask' bolts are too close to the nose, though.
Sculpt

Although this figure is an exact recreation of Kid Flash, the figure suffers from many sculpting shortcomings such as its tiny feet. Kid Flash looks like a teen whose just went through a growth spur. As this is believable, one can forgive his skinny shape and baby-face. In fact, the face's sculpt is very good. The knees don't look good when bent and the figure has no traction soles, a Kid Flash trademark.

The paint job is responsible for the problems of the figure. DC Direct used two colours of base plastic, red and yellow. Red paint is applied on the yellow plastic cast, while his the boots, made of red plastics are painted with a shinny yellow coating. Kid Flash's hairs have great toning and highlights making his red hair more vivid. His face's skin seems a bit too pale and some toning would have helped.

Kid Flash is a little bit taller than other New Teen Titans figures such as Wonder Girl, Cyborg, Raven and Robin. However, he will fit perfectly with them. Kid Flash is taller than the Silver Age Flash, which is right too. The modern adult incarnation of Wally West really topples his mentor, so it works. Next to the Silver Green Lantern, Captain Cold and Mirror Master, he look right too. A lot of collectors say Kid Flash is too tall. That's not true.

Although he has short feet, Kid Flash is stable. He is not top heavy and his feet are flat. If you want to pose him in a running stance, put him on his golden Flash action figure stand. The peg hole is customized only for Kid Flash's left foot. It will support the entire figure's weight on one foot. As the knees' articulations are tight, there will be no problems. When not in a running pose, Kid Flash looks off center on the stand.

Kid Flash has nine articulations at the neck, the shoulders, the elbows, the hips and the knees. He has no complex ball joint articulations, but he doesn't need any. One problem is that the right forearm, when bent should only be pushed forward, otherwise, Kid Flash's fist will hit his back. This was probably done to make a running pose where the left foot and the right hand are propelled forward.

Kid Flash's plastic, while not popular with fans, because of the effects it had on the looks of the figure is one of the most resistant used in any DCDirect action figure. His torso and arms being cast in the yellow plastic. Although this colour is the right one, it reflects too much light. When put against a light source, one can even see through the figure. It makes Kid Flash look less solid. His red legs don't suffer from this problem.

Except his action figure stand, Kid Flash came without any prop. A Flash ring would have been great addition. 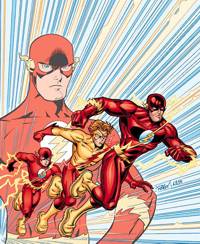 The card stock with which Kid Flash came in had a picture of the Starfire action figure and the Teen Titans' tower in the back. Although released in a wave with Starfire, they did not ship the same week.

Kid Flash used to sell from $12 to $25. Released with speedsters Max Mercury and Impulse, the entire set was unpopular with fans. Although Kid Flash was a fan favourite, the figure is a peg warmer. As such good deals are available. If you want to improve this figure, simply paint the base yellow plastic with yellow paint and give it some tones. Add blush on the cheeks and it will improve the figure instantly.
Availability

DC Direct probably overstocked this figure, although stores did not order much. DC Direct used to order more figures than ordered in those days. With a new correct Kid Flash action figure on the shelf, this one looks odd - even if the new figure is not Wally West, One can easily customize it as one, once the boots are sanded-off. Therefore, the old Yellow Kid Flash is not going to be in demand.