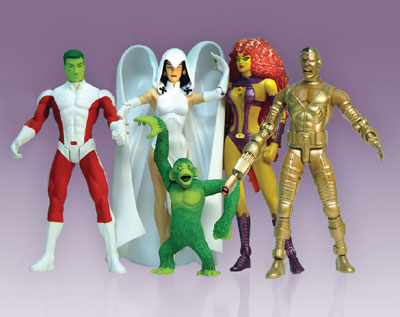 In anticipation of the Teen Titans’ cartoon DC Direct released a set of New Teen Titans action figures based on the Marv Wolfman and George Perez comic book series from the early 1980s. The Teen Titans set included figures that had been sold out and impossible to find, except in expensive auctions. DC Direct decided to release some of these old figures as variant and included two new figures that were only available in the set.

The re-offered figures in this set are the White Raven, based on the original Blue Raven action figure. Near the end of the 1980s, Raven the mystical empath sported a white costume. The second variant is the Gold Cyborg that appeared in such a state in one of the Teen Titans’ 1900s series and in some of Geoff Jones’ Flash comic book. He did not remain in this state for long. Another figure was Starfire, which remained original, although the plastic she was built originally might have changed.

The new figures were two incarnations of Beast Boy / Changeling, ths shape shifting green rich kid. One of the Beast Boy’s action figures was based on his Perez look from the New Teen Titans comic book. Originally this figure had his mullet look as drawn by artist Tom Grummet in the 1990s’ New Titans series. This look proved unpopular and DC Direct change the character’s head before releasing it. However, many fans assumed that the new head was a repaint cast of Aqualad. Aqualad is another Teen Titans not included in the set. The second one was a monkey that resembled Barrel of Monkey toys from the 1980s. This monkey had limited articulations.

A strong controversy was surrounding the release of this set as several fans were only interested in one or two figures and felt forced to purchase the entire set by DC Direct. Moreover, several fans would have preferred getting the original Teen Titans as opposed to variants. With Cyborg, DC Direct worsened the situation, as the gold look he sported had not lasted long in the comics. Other fans would have loved an improved Starfire action figure that did not fall.

Other problems with this set were that all the props included in the original had been removed. The Silver Cyborg came with an extensive set of interchangeable weapons, none of which made it in the set. Starfire had a fire base from which she propelled herself as she flew. They also omitted it. Raven had a cloud into which one could insert her feet in. While DC Direct thought they could reproduce the success of the Justice League set, also based on new variant and older action figures from different sets, it could not. The Teen Titans set did not sell as fast as the Brave and the Bold Justice league set.

DC Direct has garnered the criticism of several more fans when they announced their Modern Justice League set.