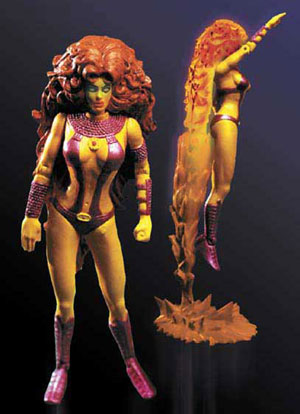 I always pictured Starfire as a Brazilian babe, a high maintenance Brazilian action figure babe, if you see what I mean. This week, DC Direct has released the new Teen Titans Four Pack, which re-offers four previously available Teen Titan figures and a new one based on Beast Boy. Starfire was first offered in 2000, in a wave with the Teen Titan Kid Flash - the yellow one. The figure in the Four Pack is the same.

Starfire is a beautiful woman. I know that this is not a power, but that's the first thing many remember about her. And since her skin is yellow or gold, she fits with Brazil's rainbow coloured people perfectly. Her attire also fits something one would see in Rio de Janeiro, during a parade. She was a new character in the Teen Titans comic book reboot of 1980 by Marv Wolfman and George Perez.

Perez drew Kori, as she her friends called her, is a beautiful and sexy woman with a baby face. Fortunately, that's what this figure gave us. She has big eyes and a sweet little face. However, her body is that of a top model. The best part is her long curly hair, just like in the comic book. The costume used for the figure, is the original metal one that barely covered her private parts. Not that it bothers me.

The sculpt is very good. Her biceps are strong, but smooth. Her hips are large and her legs long and lean. Starfire is a fighter. Her left hand is a fist that when raised up reminds of us of her familiar victory poses. Her right hand is poised to shoot some of her energy bolts. Starfire leans on her right leg. The sculptor completely sculpted the chainmail in her armour.

The paint is where the problems with this figure start to show. A purple metallic paint is used for Starfire's costume. After three years of handling, the varnish is showing some signs of wear. Here's an advice, if you must touch the figure, avoid touching any of the area with metallic paint. Hold her by her hairs or bt the waist. They are paintless. Avoid touching areas such as her face and legs. They have painted too.

The legs and her face have a pseudo ochre paint that does not match the natural gold colour of the plastic used for areas such as her arms and her abdomen. They have probably made her legs from the same translucent plastic used for her hair, head and her fire base. I assume it was a decision taken by DC Direct to cut some costs, as the translucent plastic is of poorer quality. Stylistically, it was a bad move.

The biggest flaw in the paint is the lack of tones and highlights in the hair. DC Direct added a feature whereby Starfire's eyes glow, when one presses a button on her belt, they decided to use translucent plastics so her hair and eyes would "fire up" like in the comics. As an idea this was a good idea. The execution is poor. The extensive sculpting in her hair is lost without paint highlights.

Starfire was one of the tallest women around in the Teen Titans comic books. This is respected here. In fact, Starfire is one of the tallest female DC Direct figures. She is also among the tallest all gender combined. If you put her next to the Silver Age Robin, which is the closest we have for a Robin action figure from that area, you'll think he's a midget. That's all right with me. She is the tallest Titan figure.

Since stylistically, she fits very well with Cyborg, Raven, Aqualad, Wondergirl and Robin, it's easy to display her with her friends. The yellow kid Flash also fits with her although he is too tall compared with his depiction in the comics. One of the thing about Starfire, is that even if she topples most DC Direct action figures, her face is well proportioned. She looks great next to figures such as the Birds of Prey.

Stability is the one problem that has dodged Starfire and made her the least favourite of many fans. The problem is that a figure who is not stable becomes more dangerous, when it is heavy enough to topple other figures when it falls. Starfire is an expert in that. She never falls alone. She has the traditional weak ankles found on all DC Direct figures with ankle articulations. Then there's her base . . .

I urge DC Direct if they are reading this, and I know they are, to stop adding ankle articulations to all of their figures until they find out how to make them properly. Guys, if you can't cut it, just don't do it. The little advantages gained with ankle articulations-DC Direct style- is not worth all the aggravations and problem fans face. Let's look at it this way. Ankle articulations are used for flying character or those who swim.

Usually, when a collector wants to pose a figure in a flying or swimming pose, he'll need a way to suspend the figure in the air. Except the Silver Age Superman figure, no DC Direct figures come with a grappling system. Either the fan ties a lace or a string, or he puts the leaning figure on a base. Except Aqualad, none of the figures have bases. Threads can damage action figures.

Furthermore most fans do not pose their figures in flying positions. They simply play with them for brief moments. Are those brief moments where we can bend the figure's ankles and play fly through in our offices sufficient to justify the ankle articulations? It's not sufficient. Every DC Direct action figure I have bought with ankle articulations has caused nothing but troubles for me. I can't imagine I'm the only one.

The normal reaction with a figure that has a base and stability problems is to put the figure on the base and hope it stops the problem. This is why people put action figures on bases after all. Starfire's base has caused more problems than her weak ankles. The base is a two-part plastic piece assembled by the customer. The base consists of weak plastic, like Starfire's hair that bend easily.

The weight of the figure and heat will cause the base to bend in one direction. Starfire is a very heavy figure. A trick that I found, was to alternate every few weeks the position of the figure on the base. That will make the base lean in the other direction, until it falls and damages a couple of innocent by standing figures in the process. Still, that is not a good solution. You never know when Starfire will fall.

Starfire is one of the early female characters produced by DC Direct. In those days, except the first Wonder Woman figure, females did not get much articulations. Starfire has articulations at the shoulders, the elbows and the hips. The articulation used for her hips is the V-shaped type. It is a useless articulation. It can only help posed Starfire, but it won't matter. Inevitably, she will fall anyway.

The clear translucent plastic is of bad quality and affected by heat and the weight of the figure easily. There are other types of plastics used in that figure. The abdomen contains a hollow compound that encases the battery allowing Starfire's eyes and hair to light up. The other type of plastic, is the one that should have been used for her legs. You only find it on her arms. It's solid.

With the base, we're supposed to mimic a flying Starfire with a fire trail behind her created from her hair. That's how she flew in the comics. I always asked myself if she had a large jet pack in her brain or something. They never explained that! You simply insert the figure's hair in the base and in theory, it will hold her. The bottom part of the base is where the stream parts away on the found.

Except the hair base there are no other props. However, as mentioned several times above, there is a small battery, similar to those found ion watches that allow the figure light up. After three years of use, the watch still works properly. However, replacing the battery is not easy. Starfire's hairs were glued to her butt. Although we can remove them, I didn't dare push farther to see is easily removable or if it would snap. After, that, one has to find a way to open the figure's chest.

Starfire came with a packaging with the Teen Titan tower in the background and a picture of the Kid Flash action figure. There were ads in the back for other figures. If you get Starfire with the Titans Four Pack, she comes in a large box with a clear front with the other guys.

This figure cost the same as other DC Direct figures. However, because it is not a fan favourite figure, you can easily find her in discount bins or in cheap online auctions. However, if you get the figure in the Four Pack, it will cost you about $40. That's about $8 per figures, which is what DC Direct figures should normally cost, as opposed to the $20 USD one finds in several places. 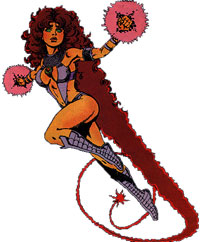 Again this is an easy figure to find. Diamond still lists the individual figure in a back order toy list. Also, since many folks who bought the Titans Four Pack, bought it specifically to complete their collections, chances are several of them will try to offload the Starfire action figure. This is good for Starfire fans. When it comes to Starfire, you are in control. You can set your price. Don't buy anything more than $10.