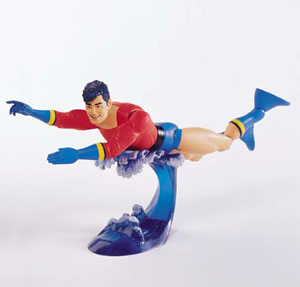 Aqualad's clothes aren't skin tight. His face smiles, yet looks more boyish compared with Aquaman's. His hair is more wavy than curly. One shortcoming of this sculpt, is that it reuses the tights from the Aquaman action figure. They are too long for his body. Although they look reused and remoulded, the biceps are shorter than Aquaman's. However, there's a possibility that the forearms have the same base.

Aqualad's paint job is good, although there's some black smudge on his forehead, just above his right eyebrow. DC Direct also painted inside his mouth. The thickness of the red and yellow paint used in joints in the forearms is too thin. One can see the colour underneath. There's some smudge on Aqualad's belt buckle. His hair has blue highlights, and DC Direct correctly coloured his eye purple.

Aqualad is shorter than Aquaman. Unfortunately DC Direct's Titans' scale is inconsistent. Aqualad fits well with Wonder Girl, Robin, Cyborg, Starfire, Raven, the yellow Kid Flash. However, his scale is off next to the Speedy. The latter is too short. Aqualad fits well with the Super Friends' Black Manta. Forget about putting him next to the Super Friends' Aquaman. They don't fit.

Aqualad is stable, yet he shares Aquaman's vulnerabilities. Nevertheless, his shorter stature poses less of a problem and he's more stable than his mentor. His knees are thicker, therefore, tougher than Aquaman's. If you have any problem with this figure, use an action figure stand. Aqualad and Aquaman were some of the first DC Direct figures to standard peg holes.

Aquaman and Aqualad have eleven articulations at the neck, the shoulders, the elbows, the wrists, the hips and the knees. The ankles don't bend. Don't try to move them. You will break the figure's feet. The shoulders and hips are ball-jointed. Many dislike the ball jointed hips although they improve the character's posing. Aqualad's neck is more flexible than Aquaman's one can bend his head up and down sideways. 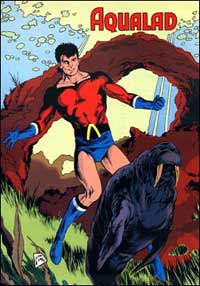 The figures' heads are in soft rubber. Their bodies are in more solid stock. It's the same smelly plastic used by DC Direct with its older figures. Try to prevent the figures from facing direct sunlight. Aqualad's entire body and Aquaman's torso's plastic's real colour are their skin tones. This colour tans after a few years, even when not directly exposed. Aquaman's legs' plastic's base is green.

The figures come with a sprouting surf stand, and a sea horse. DC Direct suggested that Aqualad lies on the surf, while Aquaman rides the sea horse. You can see from where all the gay jokes originated. Coupled with the figures' bright colours and smiles, it doesn't help. The Sea horse prop doesn't work. A prop where Aquaman can really sit on would have fitted better. The water wave is useless.

Aquaman has two sets of hands for swimming action while the other set is a hand to hold the reigns of his sea horse and a fist. Only the top half of the sea appears above the water base. There are paddles where Aquaman's feet fit, when he rides the animal. There's lots of details on the horse. Aqualad's surf base is translucent. Aquaman's golden trident was reused later in the Super Friend's set.

The figures came in a big box showing the many posing possibilities of the figures. It was a beautiful package with a see-through window where one could look at the figures.

This set was very expensive. DC Direct has recently reduced the price of its two packs to the price of two regular figures. Back then, the Aquaman set costed more than two figures. I purchase my set for $50 Canadian instead of $40, which was the exact double of the $20 I pay for single DC Direct figures. The situation was the same in US currency. With more fans onboard, DC Direct has better prices. 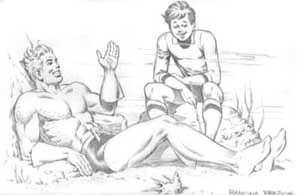 This figure has sold out from DC Direct and Diamond Comics, the exclusive distributor. It can only be found in the secondary market. While not as popular as the Silver Age Flash set, or Hawkman and Hawkgirl, this set commands a steep price on auction sites. The Brave and the Bold Aquaman Justice League variant has also sold out. DC Direct never released Aqualad again.