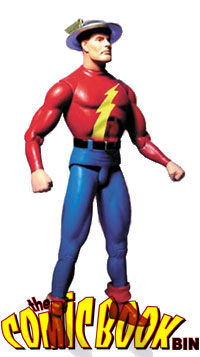 If there was an essential masterpiece action figure for the DC Direct line, it would be the Golden Age Flash. This figure is the first time the Jay Garrick, the first Flash was available in plastic. Although another magnificent figure is coming up, this one is a classic that's though to beat. DC Direct released this figure with it's first Justice Society set, way back in the Fall of 2000.

This figure is neither a very young Jay Garrick nor the older man we've come to know. Instead, it's a representation of the character at his peak, possibly around his 30s. The suit is a not as loose as the current look and the collar tighter. There are no greying temples in his hair. The wings in his helmet and ankles are blockier than the stylized that many artists have given them in the comic books.

The sculpt is excellent. There is nothing to complain about here. The sculpt is more vanilla, as the Flash is in an action stance. His body is lean and not pumped up with muscles. It's a toned body that is dynamic and well adapted to speed. Sculptor Tim Bruckner made the right hand's palm face backward. Posing the character in a running stance will make that fist look better.

The paint application is as good as the sculpt. There is a non glossy varnish on the Flash' shirt and boots. DC Direct did not bother adding highlights to his hair, because of the removable helmet. However, there are subtle, yet effective details in the Jay Garrick's eyes and lips. The thunderbolt on his shirt bleeds a little, although it is engraved in to ease painting. The wings and the helmet have silver and gold paints.

Jay Garrick fits very well with other figures released with this wave, such as the Golden Age versions of Green Lantern, Starman, Doctor Fate, The Spectre. Other figures such as Hour man, and Dr Midnight, the Silver Age Flash, The Crime Syndicate and Phantom Lady also look great next to him. The JLA Flash, the Silver Age Black Canary, the Yellow Kid Flash, the Shade and Vandal Savage are too big.
Stability

This figure is not stable because of its ankle articulation. It's not as bad as the Golden Age Green Lantern or Doctor Fate, but it's not impressive. Fortunately, DC Direct packaged the figure with a Flash stand. It's one of the first DC Direct action figures with a peg hole. The stand is not flat, while the figure is top heavy. That means that if left untouched, the ankles will loosen further and the figure will eventually fall.

There are eleven articulations at the shoulders, the elbows, the hips, the knees, the ankles and the neck. The shoulders are ball-jointed. Wrists articulations would have been cool. To hold the his helmet in place, there's a peg hole in the Flash's head. It's a very good feature, though the character without his helmet ends up with a big hole in his brain. If the helmet is always on, you'll forget it.
Plastic

The plastic is very durable and doesn't bend easily, unlike the new stock used by DC Direct. However, one word of advice, don't place your figure near direct sunlight. Mine was not, but only one side of the figure always faced light. Well after several years, there's a faint tan on the exposed side! That's because DC Direct used a flesh-toned plastic for the figure, instead of painting his face.

Besides the stand and the helmet, there are no other props. The stand, while not my favourite type is an improvement over the first one that came with the Yellow Kid Flash. The peg hole is standard. Therefore, any figure can use it. It's the only stand that can hold Mon El solidly. Be careful not to break or loose the boots and the helmet's wings. They break easily from the figure, although one can glue them back.

DC Direct packaged the figure in it's standard blister pack with a picture of the Golden Age Green Lantern, The Golden Age Starman and the Golden Age Wonder Woman. They are the other figures in this wave.

This figure used to cost anywhere from $11 to $25 USD and $18.99 to $30 Canadian. Because of the rarity and popularity of this figure, prices on the secondary market are very high. Expect to pay anywhere from $30 US to more than $100 USD in auction sites and the few stores that still have stock. At the time, I thought that the $24.95 Canadian I paid was high. Today, I'm glad I found this figure for such a low price. 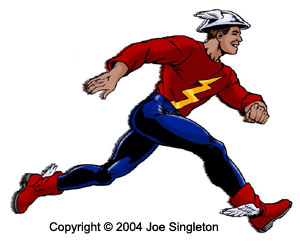 DC Direct has long sold out this figure. Although many have requested it has not released it again, unlike the Golden Age Green Lantern, which was rarer and more popular at the time. Also, perhaps not to affect their upcoming First Appearance version, I expect DC Direct to wait a long while before making this figure available again. It is a great figure that you would be lucky to own.
Hervé
Image Courtesy of Joe Singleton