However, the one set that set the tone for the future, and convinced many fans that DC Direct was a serious animal, was the Silver Age Superman and Lois Set. At the time, the quality and care around the figures also set the stage for the future standardization of the DC Direct line. Many had been undecided about this line, noticing the lack on first tier characters.

Many old times' fans also saw the set as a harbinger. Before this set, the thought of having DC Direct class Superman or Batman figures was nothing but a dream and unrealistic. Caught under the blanket of the Hasbro license agreements, fans, such as yours truly, had to contemplate buying similar looking figures, such as the Golden Age Starman or the Golden Age Flash and customize them into.

Other times, we would buy figures who resembled the real thing close enough hoping we would find a way to customize them or blatantly pretend, in our minds that they were not the Midnighter or Apollo, they were Batman and Captain Atom. Part of that old behaviour still subsides, but it is disappearing. No matter how fulfilling creating a custom figure after a loved character feels, nothing, for many beats the real deal. 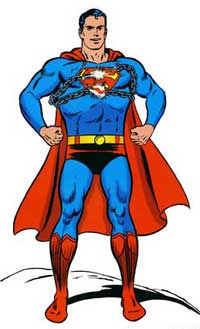 This set was modelled after Superman, as he appeared during the Silver Age of comics, roughly between 1955 and 1970. The artist whose work fans remember the most on Superman, is probably the late Curt Swan. Mr Swan did not draw all the Superman comics from that period. Several other artists also shared the spotlight with him. However, who cannot recall a visual of Superman flying sideways, his arms forward?

That Superman had a large chest. He was less lean than the Superman of the 1940s who looked more like a circus performer and Roy Crane influenced illustrations. Curt Swan had realistic sensibilities. Whichever character he drew looked real. Swan usually detailed the expression of their eyes. They were not cartoony. His characters were bulky and represented authority figures, perfectly.

Thanks to the magnificent work of sculptor Tim Bruckner, the essential qualities found in Curt Swan's Superman. His Superman has a very large chest and broad shoulders. His spit curl is clean and hair well combed. When looking into Superman's eyes, one can see in his gaze that he is reflecting and a strong-willed man. It's easy to imagine this figure preparing to lift the monitor on my desk. This is Superman.

Yet this Superman is more than confidence. His polished chest's logo, barely spreads lower than the character's pectorals. His cape is not long, but it floats in a direction. The character is a superior athlete, a mister Universe. Although veins and muscles are not bursting from every inch of his body, like modern comic book characters. This is Superman.

The sculpt, is great. There are no flaws. Silver Age designs always gave character solid proportions. There are no such things as large chests and tiny legs. Superman's thighs can carry his body. His calves are leaner, but this is similar to a Curt Swan design. Superman has a large chin and big eyes, surrounded by strong eyebrows and wrinkles. This figure looks stoic and strong.

DC Direct favoured primary colours when creating this figure. The blue on Superman is lighter than that of the modern version released earlier this year. The red is as pure and striking. However, there are blue reflections in the figure's hair and his lips are peach coloured. Superman's belt buckle is paint with gold paint. I don't know if this was intended to be this way in Silver Age comics, but it does not detract. 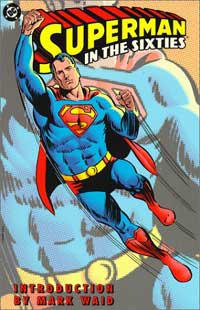 In theory, Superman is taller than all of his Silver Age buddies. This figure is definitely shorter than the modern Superman figure, and probably, all the upcoming JLA figures. DC Direct is to blame for this. At first, they settled for a six-inch scale. Slowly, they are moving away from this and basing their figure on a seven-inch scale. Recent Silver Age offering may suffer from this inconsistency. 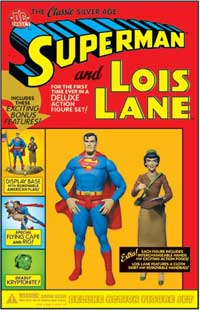 The figure has some biceps articulation, allowing his, to carry Lois Lane, as seen on the package. He comes with two sets of hands. Closed fists, and opened. This is a great thing. As mentioned above, the one flaw with this figure is the ankle articulation. DC Direct gave some to Superman, so he could stand in a flying position. However, the ankles do not look good when bent and are notoriously weak. 1   2