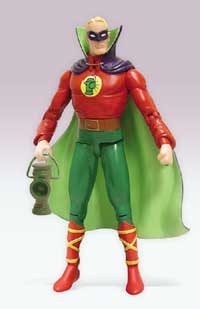 The Golden Age Green Lantern's action figure, true to its comic book counterpart has managed to become a cult character, cherished by comic book fans everywhere. I'm not exactly sure if DC Direct released this figure before the ones available in the Green Lantern and Justice Society PVC sets, but one thing is clear, this was the first articulated action figure of the character and one of the company's best seller.

This figure, based on the original Green Lantern character, created in the 1940s, by Martin Nodell, has earned the distinction of being one of the first chase figure ever, from DC Direct. Even I had to get mine from an auction site, although that was before the demand and value of the figure reached ridiculous proportions. I had been too selective, in my earlier DC Direct purchase and ignored the first JSA figures.

Just like the Golden Age Flash, Alan Scott has survived his replacements and now works with the third generation of character bearing his name. This is no small feat. Of course, that Alan Scott was one of the most popular Golden Age character helps. The Golden Age of comics, for those who don't know, refers to the early comics printed from the 1930s up to the mid 1950s.

In the JSA and the DC universe, Alan Scott occupies the distinguished role of being the top guy from the World War Two era, when the first super heroes and mystery men appeared. Today, he is still considered as one of the senior and moral leaders of the DC universe. His prestige in the comics, his second only, to Superman. However, even Superman and the Batman, usually defer to him.

This is the man whose action figure we are looking at today, and I must say that the figure captures the character's grandeur perfectly. There have been several variants of Alan Scott's costume since the 1940s. His costume, unlike, say, the Golden Age Flash leads artists to more interpretations. I must admit that even I am not an expert on what could be considered Alan Scott's classic and seminal costume.

However, most of the traditional elements are respected. Alan Scott sports a cape, whose interior is green, and outside purple. He has puffy sleeves. Some modern artists have drawn him with tight fitting sleeves often, but the puffs, are the more original and known versions. This figure sports a mask that circles the character's head and covers his nose. Some versions have him with a domino mask.

The legs are often drawn the same, though the designs of the calves' laces vary depending on the artist. The character's belt also varies. The figure has a leather belt with a buccaneer's buckle. The chest logo is the drawn version found in earlier comics. In some versions, the lantern's handle, hangs. In others, it stands above the lantern. In the figure, the sculptor and designers chose the high above design.

Finally, a review of the Golden Age Green Lantern's action figure likeness to the original comic book design, would not be completed without a mention of the character's ring. It is on the ring finger of his left hand. However, only the best expert will confirm whether the ring is on the right finger or not!

The sculpt used on this figure has a retro look, but not one that harkens back to the Golden Age style from the comic books. Alan Scott's sculpt is tight and streamlined. The angle on his right arm is annoying though. It makes the arm look too long, for the figure's proportions. I find that Alan Scott's simple face feature contrast with the detailed in the Golden Age Flash's head, and that of other JSA figures. That's because the mask is not a tight fitting one. Alan Scott looks like one of DC Direct's Silver Age's figures.

Earlier DC Direct figures, such as this one had better paint jobs. Although the figure's costume is nothing but straight primary colours, his hair and lips have nice paint touches. There are brown highlights in the hair and the lips are peached-coloured. The logo is well drawn with several line art details. Although, exposure to the sun may produce some paint blemishes. 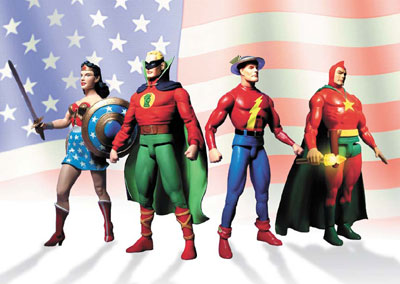 Alan Scott's scale with most JSA figures is perfect. He fits extremely well with the Dr Fate, the Golden Age versions of the Flash, Hourman, Dr Mid-Nite, the Spectre, Starman and Wildcat. Although he is supposed to be a tall man, he is about the same size as earlier Silver Age figures like Superman and Batman. Next to his main villain, Solomon Grundy, Alan looks very small and the style's difference is stark.

Alan Scott has problem standing up because he has ankle articulations. DC Direct's ankle articulations are notoriously poor. Every figure has problem standing up. I believe that the little benefits of being able to pose the figure in a flying position are minor and not very good deals, compared to the anguish and problems of a figure who falls on the ground at every occasion.

The absence of peg holes and the top heavy chest, worsens the problem with the figure's stability in my version. The first edition of this figure, along with other DC Direct figures did not have peg holes. I do not know whether the version released after had some. You can easily correct that problem by drilling a hole with a 1/8 th drill in the foot of the figures. The figure should then fit most peg bars for six inch figures.

The articulations for this figure are the standard twelve points. The neck, the arms, the elbows, the hips, the knees and the ankles articulated. The hip's articulations use the t-crotch type. However, unlike recent DC Direct figures, this articulation is not well hidden. The elbows' articulations have a similar problem. The ball-jointed shoulders on Alan Scott are very loose. Though his arms have not popped out yet. 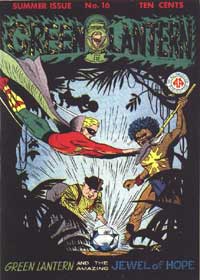 Alan Scott uses the standard DC Direct plastic that stinks for days, and during the summer months. There was also some gooey stuff under the armpits. The character's head contains sturdier plastic. The ring prop and the lantern are in soft plastic.

The ring is modelled after's Alan Scott's unique power ring. It looks like an old oil lamp. They paint the cavity in the ring green to mimic the energy flowing through the ring. Except Green Lantern Kyle Rayner's ring, Alan Scott's is the only one who will fit the fingers of a normal adult, as opposed to a child. Most of the plastic Green Lanterns' rings are usually uncomfortable and must be removed quickly.

The lantern that fits in Alan Scott's right hand seems to be based on the same base sculpt as the ring, although some differences exist. Unlike the Lantern of the Silver Age Green Lantern, Alan Scott's will not slip easily from is hand.

The figure comes in the standard blister pack like other early DC Direct action figures. On the front of the card, there are pictures of the other characters released in this wave. The background is a sepia-like busy street from the 1940s with stylish cars and people walking. The back cover lists other figures and there is a short bio on the Golden Age Green Lantern.

Both releases of this figure were sold at the standard DC Direct single figure price, whatever that is for you in your area. Again, the price of most retailers is steep, because of DC Direct's lack on an established suggested price. Again, I urge DC Direct to correct this problem that annoys most of its customers. Will they ever listen?

This is where the fun begins. Several scalpers, influenced by the rarity of the first release, attempt to reproduce the same effect with the second release of the figure. Do not fall for that trap. This figure is widely available in comic book shop and specialized stores. Diamond also has some stock left. Be careful of others who try to peddle the first release as something rare. Just get the second release.

I do not know whether there are differences, such as peg holes, but that, and the card cover art, is not sufficient to make the first version special. Also remember that unlike Jay Garrick and other early JSA figure, Alan Scott has been released a second time and likely will be again. This is probably DC Comics' most popular Golden Age character, after, Wonder Woman, Batman, Superman and Captain Marvel.

Expect another Golden Age Green Lantern action figure from DC Direct in 2004. That one will be based on Martin Nodell's designs. However, Martin Nodell is hardly Neal Adams nor a great illustrator. His only merit was to have coined a character with a weird sense of colours-based Aladdin and his magic lamp. If you want a comic book accurate and well designed Alan Scott figure, just get the first version.