The left arm of the new DCDirect JLA Aquaman action figure popped out of my hands when I opened the package. Surely, this cannot be a good thing. This is the third Aquaman action figure done by DCDirect. Many hoped the Ambiguous Gay Duo smile of the Silver Age version would not dodge it. Others hope it would fit better than the SuperFriends' version. The previous versions are better than the new one.

I don't know who Aquaman is anymore. I have problems accepting that the classic orange shirt Aquaman and Peter David's version are the same character. The first version of this very figure was based on a shirtless and trimmed beard version of the Tom Veitch comic book but then DC Comics decided to reintroduce the shirt and cut the beard. The figure resembles that version but lacks the scales on the torso.
Sculpt

The figure's torso is very large, but his legs are too thin. Swimmers usually have larger thighs. Aquaman's veins show in his arms. They are remnants from the shirtless look. The scales on Aquaman's thighs look like lepers. The removed trimmings from his thighs' imbalance the design. Aquaman's left calf is seriously thinner than his right one. His neck is very thick and his faced is based on Melrose Place's Jack Wagner.

The paint job is horrible. The situation is similar to the first Kingdom Come wave. The figure's back is dirty. There are scratches on the figure's water hand, and torso. The paint does not cover the base colour of his forearms sufficiently giving them a darker look. The gold trimmings don't cover his belt, wrists and neck entirely and bleeds at other times. Although Aquaman's face is also dirty, his hair has great highlights

Aquaman is almost as tall as the Modern Age Superman. Therefore, he is taller then either the Superfriends and the Silver Age versions. He will fit perfectly, of course with the other figures of the JLA wave such as the Flash and Wonder Woman. Aquaman isn't much taller than the SuperFriends' Black Manta. Except the Martian Manhunter, few figures outside the new JLA set will fit with him.
Stability

This figure is stable enough although his top heavy chest may be a problem. His thin knees may be a problem in warmer months and may not be strong enough to support the figure's weight. You will eliminate stability problems when you put the figure on the stand that comes with the package. However, the weak knees' problem will not be corrected. Expect the figure to fall while bending its knees.

Aquaman has articulations at the neck, the shoulders, the elbows, the hips, the knees and the left hand, where the translucent water hand is. The shoulders are ball-jointed and like I said, one of them fell when I opened the package, they are not firmly held at the sockets. A ball-jointed neck would have been better than the cut in Aquaman's neck. The misaligned neck detracts from the sculpt.
Plastic

All the new DCDirect figures now consist of a lighter compound that makes the figures' limbs easy to bend in warmer months. It's the same cheap plastic used in the second Legion of Super Hero wave. I wish DCDirect would return to the older plastic which, although it stank, was much more durable. The plastic on these figures is cheaper than Toy Biz's Marvel figures, yet, they cost three times as much.

Aquaman comes with the same trident that came with the Silver Age version of the character. Although the JLA stand is good, DCDirect only included one peg bar. This is ridiculous. Fans usually put two figures on those large stands. If this had not been a JLA-focused release, a reef-shapped stand might have been a better alternative.

The packaging is almost excellent. DCDirect has finally applied some of the suggestions made in previous reviews and added some original artwork on the figure's card cover. There's a group shot of all the Justice League figures from this wave. The rest of the card features a stargaze background similar to the one in the modern Superman wave from early 2003. The back cover has shots of all of this wave's figures.
Cost

This figure, like all DCDirect action figures is over priced when compared with Toy Biz, McFarlane's, Jakks or Mattel. DC Comics' characters are some of the most popular and more fans would purchase them if they weren't so expensive. With a fairer price, DCDirect could even distribute them to regular stores outside comic shops. 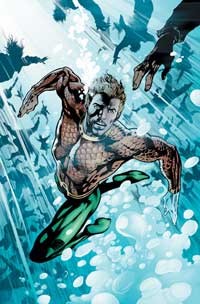 These figures have shipped late. There was hope that the lateness was due to DCDirect enforcing some tougher quality controls on the output from the Chinese factories. If they did, it wasn't enough. Some Philippine fans have already started hogging auction sites with the first arrivals. However, presumably, these have been ordered in great quantity and should be available everywhere, as of December 3, 2003.