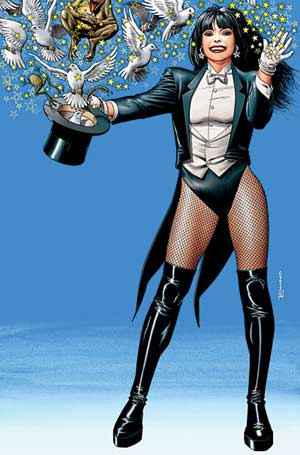 Some comic book characters have peculiar fan followings and guess what, Zatanna Zatara is one of them. Zatanna Everyday Magic is a new 48 pages oneshot written by Paul Dini, the award winning writer famous for his work on the animated DC universe and Rick Mays, artist on Kabuki.


The premise of Zatanna Everyday Magic (ZEM) is simple. The story is based on the life on a regular day of work (and night) of Zatanna. Zatanna, is a one of the most popular female characters in the DC Universe. She has starred in a mini-series in the 1990s and was a member of the famed Justice League. Zatanna is the daughter of the Golden Age magician Zatara and Sindella, a witch.

Zatanna first appeared in several comics throughout the 1960s, looking for her father. She befriended Hawkman, the Atom, Batman, Green Lantern and more. She concluded her search in the pages of the Justice League. When reading these pages, the sympathetic and warm personality of the sorceress will catch you off guard. She hugs and kisses others with genuine tender and friendship. 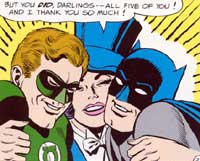 Paul Dini has managed to capture the same energy in ZEM. Zee, as fans know her, is a casual girl using magic in her daily activities and not feeling too serious about herself. She hangs out with the top celebrities and super heroes in the world, yet, she is a simple stage magician trying to find love.

The personal relationships in ZEM are central to the story. One could say that it takes precedence over the actual adventure and conflict. There's like a series of running jokes about Zatanna's past boyfriends and men cruising her. It creates a weird parallel with the Nimue Ravensong, the Goth dabbler confronting the heroine. Zee has problems keeping her boyfriends. Nimue gets rids of them after the first date.

Zatanna's old college flame, John Constantine shows up asking for help after being cursed by Ravensong. There was much play on their past relationship. The way they interacted there also parallels the infamous pot smoking scene in Constantine's Hellblazer, several years ago. Many Justice League readers lost many sleep night trying to accept that Zee smoke a joint furnished by Swamp Thing on John's birthday.

There are problems with Constantine's presence in the comic book. The relationship with the characters was established in Hellblazer. The problem with unified universes, is that characters with common elements are often matched together or tidbits created about past encounters retroactively to imbue them with some history. An example is the revelation that Ted Grant, Wildcat trained Batman.

While Dini is not responsible for that retcon, he completely over plays the exboyfriend bit at the expense of Constantine. Constantine travels the world meeting magicians and extraordinary people. Being the star of a long and critically acclaim series makes him the perfect everyday man to use as a way to pitch Zatanna into action. He serves as a way for Vertigo readers to get acquainted with Zee.

However, the bulk of readers buying this story are already familiar with Zatanna and probably less with Constantine. Having such a cunning man play an idiot in this story and falling for Nimue's trap is hard to swallow. This is the same John Constantine who tricked the First of the Fallen, the Angel Gabriel and many more. This man tricks demons and Gods for breakfast. In ZEM, all we get is Constantine light.

Although there is a brief explanation for Constantine's entrapment, it is not sufficient. What it achieves is make Zee shines by making a fool out of Constantine. The same thing was used often in previous stories about Black Canary. Green Arrow would be reduced to the status of an incompetent in order for the Canary to show her experience. Zatanna does not need to borrow Constantine's notoriety to look good.

The artwork in this story is charming and quite appropriate for Zee. Again my only complain relates to John Constantine's representation. Although all the basics of the characters are there-the trench coat, the unshaven look, the cigarette and Sting's hair style, this John looks too soft and too cartoon-like. It only reinforces my perceptions of the character as a lighter version of the old British grunt.

The art was bright and fun looking. Mays has a serious touch for action and gestures. I really like the expression he drew on the face of the sloth and Zee's imaginary friend. Most of all, his Zatanna feels so real, that it is like peeping through her life. Mays draws most of his characters with big smiles and that is refreshing and entertaining. 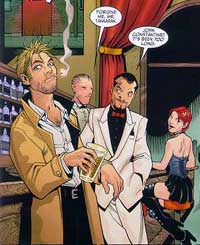 The storytelling was excellent. One problem of the last Zatanna mini-series was the use by author Lee Mars of several shorthands to get her point across. Readers had to compensate much information by relying on a few muttered words and well-placed panels. Her writing and the art by Spanish illustrator Esteban Maroto were excellent. However, it was not accessible for most readers. ZEM is easy to read.

The composition in ZEM is well planned and one can easily figure out the action without having to read the dialogue. Dini doesn't overpower the story with excessive scripting. Each word is well integrated into the story's flow. The seasoned lettering by Comicraft and simple, but effective colouring by Brian Miller reinforces the entire project.

Upon reading about this book being published by Vertigo, many readers were afraid that DC would remove Zee from the standard DC Universe. Well, old time Zatanna fans have no reasons to fear. There are passing references to the Justice League and even some of the heroine's life with a Gotham playboy. Dini, of course, is responsible for matching Zee and Bruce Wayne on the Batman cartoons.

A great cover by Brian Bolland supports the project who expresses the same joy and simplicity of the character. Zatanna is really a cool lady to get to know. This series, although making light uses of John Constantine, is a great little epic about the best looking fishnet stocking wearing woman in comics.