Marvel Select's Green Goblin action figure captures the cover of the Amazing Spider-man # 39, where the villain discovered that Peter Parker was the hero's alter ego. The cover by John Romita Senior is memorable because it was the first Spider-man comic book drawn by the artist. This issue was also one of the first time that a hero's secret identity was exposed to a villain. Let's see why this figure is so great.

Although the Green Goblin's figure resembles its comic book counterpart, it is a modernisation of the Romita look. It's face is much more realistic, its hat is not fluid and snake-like but an edgy and rough shape. The Goblin's glider is completely different from Romita's version. It's wings and hull are thicker. The bat wings are simplified. Nonetheless, this adaptation makes more sense is more visually pleasing.

The sculpt is excellent. The Goblin truly looks alive. This figure may be the best Green Goblin figure ever, just because of its sculpt. There are few cuts on the figure. His face looks diabolical and insane. Yet the figure looks in control of the glider and it's easy to picture him flying around like a maniac. The Green Goblin's shirt is a removable piece of soft rubber. The torso underneath looks fully sculpted. This is cool.


The paint application on this figure is one of the best from Marvel Select. Some manufacturers apply heavy contrasted hues to delineate a character's features and muscles. With this figure, designers favoured the subtle approach. A variety of hues cover the chainmail skin of the Green Goblin. His p0urple clothes have darker colours that penetrate the fabric-like etching of his hat, boots, gloves and shirt.

Although permanently crouched, this is a seven inch action figure. Of course, it's a perfect fit with other Marvel Select figures, like the Ultimate Captain America, and other Spider-man action figures from the line. Nevertheless, this figure looks great with other Spider-man figures that aren't inspired from the two movies, like the Hobgoblin figure, although the Green Goblin is larger.

The figure wasn't designed to stand on its own. It's ankles are too weak and the crouching pose prevents it from being a free-standing action figure. Yet, on its glider, you'll find two peg bars to insert the figure's feet in and an harness on top. The left foot of my figure keeps on getting out of the peg and the harness on the glider. Also, depending on how you position the Peter Parker action figure, unbalance the glider.


The Green Goblin has 22 articulations. It's neck is ball-jointed, there are two articulations at the shoulders, rotating biceps, forearms, wrists and calves. The waist can twist too. There are hip articulations that replace standard ab crunches. Marvel Select has developed a new thigh articulation for crouching action figures, that allow them to widen their legs. Finally, there's double articulations at the ankles.

Most of the figure is in durable PVC that doesn't seem like it will be affected by warm weather. The Green Goblin's hat is glued on his head, and like the villain's shirt, the rope glued in Peter Parker's back, and the handbag are in rubber. The Peter Parker action figure is all in PVC. 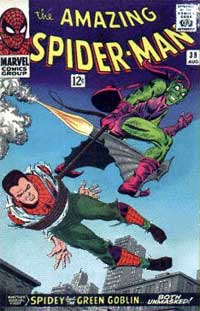 The glider fits on a pedestal that stands solidly. Putting the rope from Peter Parker's back in the right hand of the figure will allow it to hold the hero. Unfortunately, for balance the pedestal is too short and the Peter Parker can't be held up completely. He'll probably lie on his back on your desk. Peter Parker is too heavy to be put on an edge of a surface so he can free-float. He'll topple the Green Goblin figure and the glider.

The Green Goblin comes with a handbag, a PVC Jack O Lantern grenade and the glider. The Peter Parker figure has no articulations. Just like the villain, it isn't an exact recreation from the comic book cover. His head is a separate piece, glued on the body. It would have been fun if it could twist. The paint application is not perfect. The glider and the pedestal have faux metal finish and consist of hollow plastic.


The packaging is dense to hold all the parts of this mini diorama. Although it's fun, it probably increased the figure's price. Toy Biz took great care with the design. The box's background is a composite of several Amazing Spider-man covers with green tones. On the left side of the box, there's a painting of the Green Goblin's head. A short bio of the figure and shot from other Marvel Select products are the back.

This figure cost twice as much as a regular Marvel Legend action figure and one time and a half more than a DC Direct single action figure. Price may vary with each retailers, but prices are usually $19.99 USD or $24.99 CND. Like mentioned above, much of the cost have to do with the packaging, although the set has better plastic than regular Marvel Legends action figures. It's not as brittle and the paint job is fine.


This figure was sold through Diamond Select exclusively. Although released a few months ago, it was easy to reorder. The market has already sold out of earlier Marvel Select action figures like the Ultimate Captain America, so expect this figure to sell out quickly in a few months. As this is the best Green Goblin action figure, it may be very sought after by collectors. It truly is a surprising toy.


Read related reviews such as: