Diamond's aims seemed to be to create a DC Direct alternative for Marvel characters, usually made by the latter's Toy Biz division. Diamond has also been involved in the development of exclusive action figures for other popular animation and comic book properties such as the Battle of the Planets and Astro City. Nonetheless, Toy Biz produced the figures for Diamond.

Marvel's Toy Biz has been introducing several deluxe action figures of their characters in their Legends series that seems to compete with DC Direct's 6 inches line. However, a quick glance at the Marvel's Legends figures and Diamond's offering lets any regular action figure fan see the differences. The Legends' figures are more articulated and much cheaper.
In absolute business terms, one wonders why Diamond would license Marvel characters that it then sells to the same people buying Marvels regular offering. It must make business sense for them. Just looking at the Diamond line can tell us why. Diamond markets its figures closely with specific comic books' stories or events. Marvel's Legends figures are more timeless.
The Captain America action figure is the first Diamond Select release of 2003. Just before the Christmas holidays, Diamond treated fans with the Elektra figure. Just like the Elektra figure, the Ultimate Captain America comes with a complete diorama set. His' being a brick wall and a stand filled with World War Two German military objects.

Like all Diamond Select figures, the Captain is a seven-inch figure. This reviewer would have preferred six inch figures. Diamond's figures do not look right next to six inches figures such as DC Direct. Even large figures, such as The Martian Manhunter and Vandal Savage look like dwarves next to the Captain. However, other Diamond Select figures match each other's scales

The Captain America figure contains the same robust plastic found in other Select offering. It won't break apart or leak that gooey oil found in the articulations of many other action figures. The elements of the diorama consist of solid rubber. They assemble at the base. Without his stand, the Captain can stand upright but he doesn't seem very sturdy.

The Captain comes with a crest-shaped shield with handles, a styled grunt's helmet with non attachable bands, a harness and an American flag that he holds in his right hand. A hand gun would have been more appropriate for the World War Two Captain.
Captain America's sculpt matches the comic book designs created by Brian Hitch in the Ultimates' comic book. The woven fabrics of his clothes are visible. Each button and leather crack appears on the costume. The harness contains its share of details and the designs on the shield are sculpted. Similar details can be found when removing the Captain's helmet.

The paint job suffers somewhat. The red bars on the Captain's shirt bleed on the white ones. The white star in the middle of the shirt shows the original blue plastic. The Gold paint on the flag pole is full of errors. However, the paint in the character's face, his harness and other areas have some pleasant dirt shades. With the woven fabric style, it looks interesting. 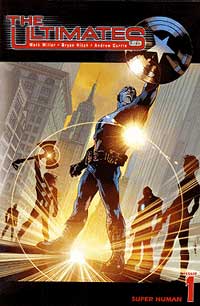 The articulation on the Captain is poor. Diamond clearly favours sculpting and looks. The neck is ball jointed. The Captain's head can nod in the front, the back and sideways. This allows for cool posing. The shoulders are also ball jointed. The harms, the wrists, and the waist can twist but there are no joints at the elbows. Bellow the waist, the Captain is stiff. Perhaps that's why the packaging describes him as a statue.

The packaging for the figure is fragile at best and voluminous. Several packages at the comic shop were already opened. For the cost of the figure, this is a serious flaw. Diamond Select figures cost more than equivalent DC Direct action figures.

Overall, this figure is a mixed blessing.