If you've been watching the Comic Book Bin's forum, you can guess how happy I am at the arrival of this figure. Even if we had to wait a few extra weeks, I'm happy to say the figure has bested my best expectations. This figure is the new pride of my collection. That's saying a lot since I own so much plastic. The Ultimate Ironman figure is the latest entry in the Marvel Select collection focusing on their Ultimate universe.

I don't collect Evangelion and other mecha action figures. I don't get Transformers very often. I'm more interested in real characters with human like proportions, but this figure is different for me. I just love it. This is not my father's Ironman and I really don't mind.

This figure is a straight three dimensional representation of the character appearing in the Ultimates comic book series published by Marvel Comics. So far, I believe the Ultimate Spider-man and the Ultimate Captain America have been the only characters translated into plastic by the Marvel and Diamond imprint called Marvel Select/Diamond Select. The Ultimate incredible Hulk is on the way.

In the Ultimates comics, the Ultimate Ironman is industrialist Tony Stark. He is a new age technology baron/guru like Steve Jobs or Bill Gates, except one thing. He is also a play boy with good looks and less older. The Ultimate Stark, like the regular Marvel Stark, is the creator of the Ironman armour, which is partly responsible for keeping him alive. In the Ultimate universe, Stark suffers from a brain tumour. 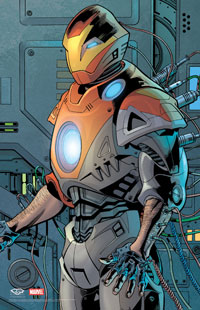 Brain Hitch, the famed illustrator and designer behind the Ultimates series, designed the armour. Hitch's mecha design is hip and aerodynamic, like current mecha designs. Hitch, however is not a professional mecha designer. He did a great job with Ironman, but it is quite a challenge for an action figure to mimic a design that does not look like he conceived it with a solid model sheet.

The Ultimate Ironman portrayed in this figure captures the specific details visible in a few Ironman illustrations such as the cover. This is what Marvel Select do best. They capture one moment straight from their comic books. Hitch's design is full of angular shapes that meant to look good as a two-dimensional drawing, not a three-dimensional toy. Therefore, some proportions are not exactly aligned.

For example, the edges of the ridges under the breast plates do not blend into the armour in the comic book. In the action figure, they have an angle that smooths them in. Another second example is the collar piece. In the comic book, it is smaller. A third example is the articulation piece at the elbows. It is smaller on the action figure. I believe a well-standardized model sheet would have help the sculptor overcome this.

The sculpt is complex and cool. Overlooking the details of Hitch's design in the comic book is easy. However, the action figure reminds us that Ironman is a very complex character to draw. Most of the figures assume a vanilla pose except the asymmetry in the arms. To respect Hitch's design, the sculpt had to do things that I call the "Cobra syndrom." The villains of Hasbro's G.i.Joe action figures of the 1980s often had helmets that were just too small to make sense. No regular human could fit their head in there.

The Ultimate Ironman has the same problem as say, the Track Viper from my old G.i.Joe collection. There's no way his head could fit in there. The helmet is too small and the chin and jaw piece so high that Stark could never swallow his own spit in there, or even talk. He would suffocate. The way his thighs connect to his trunk is also impossible, unless the man has no legs.

Yet, other parts of the model do a great job showing that a man is hidden underneath. As you probably know, we can remove the forearm plates, carrying laser guns. Underneath, are the bare arms of Tony Stark, with some Matrix-like plugs that can connect to cables. Overall the figure's sculpt is great.

Many fans complain about the paint job done by Marvel's Toy Biz. I disagree. I could not find any major paint problem with this figure. It is also covered with a special metallic finish found on toy sport cars. I cannot predict if this polish will resist constant rubbing. Tony Stark's arms are dirty, but that's appreciated. It captures the effect very well.

Like all other Marvel Select figure, this figure is about seven inches tall. It will definitely look odd next to regular six inches' figures. However, the figure looks great next to the Ultimate World War Two Captain America. Well, except the scale of Ironman's head. When putting the two next to each other, this becomes very apparent. Ironman's head is ridiculously too small and impossible physically.

This figure stands up well. Its feet are so large and flat that it cannot fall. Each leg is heavy enough to anchor the character, although the upper body weights much. One can even adjust the legs and ankles to give the figure some posing. This does not affect the figure's balance.

The articulation of this figure was my greatest surprise. I was expecting a statue from the waist down, like the Ultimate Captain America. Ironman lacks articulations in the knees and elbows, two of the classic spots, yet he sports, at last count, 14 points or articulation! Finding them was half the fun. Ironman's head is completely movable. It can nod, rotate, bend sideways. Like many recent Toy Biz figures, Ironman's chest can move at the base of the abdominal section. It can turn and bend forward and backward.

The boots, just under the knees can rotate. However, I'm not sure if it is a real articulation and not some engineering legacy artifact. The ankles can rotate horizontally, but also up and down. That means it's easy to put Ironman in a flying position. The legs at the hips can also rotate. You can even spread the legs apart a little. Of course the wrists can turn. Twisting them helps remove the forearm plates easily.

In plain English, that means you can rotate the arms on the base of a socket that is itself connected to the torso. This double articulation gives the shoulders more room to manoeuver than regular ball-jointed figures. Ironman can aim his laser cannons at an opponent. He can take various flying positions. This articulation feature was extremely well hidden like a good Easter egg.

The plastic used on the figure is the light hollow one. Nonetheless, the figure is quite heavy. This type of plastic, however is easier to break than standard DC Direct plastics because it is not rubber like. The docking bay that comes with the figure, contains similar plastics. Only the pieces in the knees, upper thighs and neck seem to contain softer plastics.

Ironman comes with a docking bay where we attach rubber cables to the forearms of the figures. We must assemble the bay but markings on the pieces help built the set. The only problem with the docking bay, is that the arm rests are too low for the figure to put them there conveniently. Other pieces look as if they could rotate but cannot. A lamp on top of the bay can be rotated.

Marvel Select's packaging is generous. The background of the plastic box has a sepia coloured montage of covers from Ironman comic books from the past. I almost felt bad destroying the packaging. On the right side, there is a painted illustration of Ironman's head. On the front of the box, there is an Ironman like bullet surrounded by circuits. In the back are pictures of the Ultimate Ironman and related products.

For me this figure costs about $5 extra bucks than a single DC Direct figure. I think it is a more realistic price, although, I wouldn't mind a price reduction. Of note Marvel Select figures cost twice as much as regular Toy Biz action figures with stands. It is manly due to the limited distribution of the figures.

Although the Ultimates comic book line sells mainly to the new stand market, the figures can only be found in the direct market composed of comic books and specialty stores. I do not know what kind of distribution and sales the Marvel Select material gets. Of course, I have not seen many in offline stores since I started collecting them. One has to admit that they are an acquired taste.

Since this figure is so different from past Marvel Select offerings and better articulated, I'd suggest serious fans to net let it pass. It is a beautiful action figure based on a character featured in one of the best-selling comic book of the last few years. When DC Direct started, it was small and not collected. When late comers came into the game, older figures became scarce. Don't be a late comer. This is a great toy. Read reviews of related figures such as: