The Captain America action figure sports the classic look of the character from the Silver Age to the present. He has the letter A on his forehead. Sleeves cut in the middle of his biceps. There are fake chainmails on the top part of his torso and shoulders. His buccaneer's boots would have looked better if the folded part was longer. Captain America's face looks like Jack Kirby's version.

The sculpt of early Marvel Legends' figures are gruesome compared with what if offered now from the company and competitors. Many avoided Marvel Legends because of that. Captain America is very buff. Nonetheless, once I got the figure, its grotesque looks grew on me and It's now a favourite. The Captain's gloves are far too large to look good. The Captain's face is the best sculpted area of the figure.

Paint
There are several problems with the paint application. There are bleeding all over the figure and the white coat on the figure's sleeves is botchy. The chainmail is a decal that can easily peel. There are lots of scratches all over the figure's face and body. The blue paint on Captain America's legs and thighs doesn't cover all area, leaving large chunks the base plastic visible.

Although his ankle and toe joints are loose, Captain America stands very well. Using the diorama that comes with the figure is a good idea as peg holes hold the figure solidly. The figure's stability suffers from the way the sculptor designed its abs. My figure came packaged with the ads backward. When adjusting the abs and the back, the figure will hunch and become unstable.

Marvel Legends uses cheap plastic that's appropriate for kids, but not good for collectors. The plastic in the joints often peels if too much posing occurs. The plastic makes the articulations loose.

The backdrop is a blown up window. At the foot, sits empty ammo shelves and the top part of a tank's canopy. There's a detachable flag that fits in the canopy. Considering this version of Captain America is from the Silver Age up to the Bronze Age, the World War Two backdrop doesn't fit with the figure. There's a peg hole in the back of the wall to attach the figure to a real wall. The canopy and ground pieces are difficult to attach to the wall but once inserted they hold up well.

The Captain comes with his classic shield. There are two harnesses made of elastics covered with fabric. To hold the shield securely to Captain America's wrist, there's a grip on the shield. Like the figure, the paint is sloppy. The American flag that comes with the figure is a sheet of paper glued to a plastic pole without paints. The paper flag easily detaches from the pole and becomes useless. 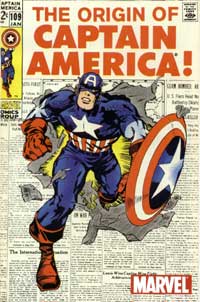 The figure comes in a Blister pack with a Captain America # 109 that tells the character's origin. It's by Jack Kirby and Stan Lee. Marvel originally published it in 1968. This is a great value for kids and collectors as they get a classic comic book with an action figure. More vendors should adopt this strategy.

Marvel Legend's prices vary depending on the size and distributor of the retail outlet. Some large online stores and chain offer the figure for less than $10 while smaller stores sell for more. The price of the figure really depends on the distributor and not Toybiz.

Availability
This figure used to be sold out from Toybiz, but it seems that the company is releasing older figures again. Many stores still have some in stock. However, it is doubtful that the figure is still available at larger chains. Toybiz will release an updated Captain America action figure based on the Ultimate version of the character. It is not the same figure that Marvel Select released in 2003.