The Nomad's comics offered at the Comic Book Bin are from his regular series written by Fabian Ninieza in the mid 1990s. In these stories, he fought Miami-based crime boos, the Slug and roamed around America with Bucky, his baby sidekick. 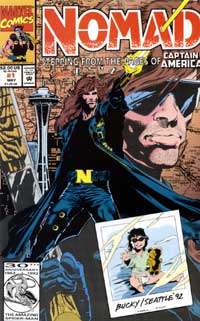 When Monroe returned to life, The military instructed him and the second Captain America to stop the genuine Captain. After all the confusion was fixed, Monroe graduated from Bucky to Nomad, one of the original Captain America's temporary super hero identity. Nomad's gimmicks have always been his hand-sized disks that he throws around like a frisbee or a Captain America's shield.

In a sense, Nomad is Marvel comics' answer to Nightwing, although he appeared much before. Both are icons' older sidekicks who grew out of their identities and became their own man. Both use the same fighting techniques and gimmicks of their former mentors. However, as a Marvel character, Nomad has been through many hoops and changes. 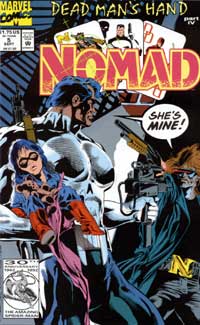 Unlike DC family characters, Marvel ones are always good fodder. DC characters don't go through as much identity changes as Marvel ones. Although he had a brief period as Batman, Dick Grayson, has mostly stuck with his Robin and the Nightwing identities. Nomad, who seemed to have found a voice for a while has been the Scourge, from the Thunderbolt and more.

Marvel-based derivative characters often end-up as villains or mind controlled nemeses who return to haunt their former buddies and other heroes. Something similar once happened to Arsenal, Green Arrow's former sidekick, although it was very brief. The defining theme for Arsenal's character has been battling his drug addiction and raising his daughter.

Nomad has had a daughter too, which he called Bucky. She was the daughter of a prostitute whom Nomad perceived as an unfit mother. For a while, Nomad went around America with a baby sidekick on his back. That was a fun idea, although, it didn't last. Nomad, like Rick Jones, Marvel's sidekick par excellence, will probably continue to be used as fodder for stories.