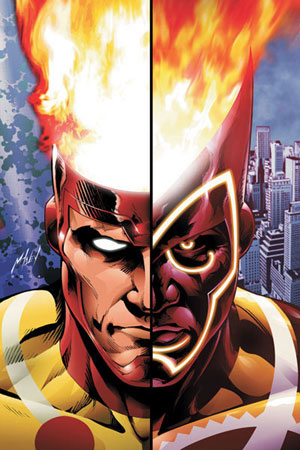 The original Firestorm, Ronnie Raymond and the new one Jason Rusch find they now share the same body, allowing the supposedly deceased Ronnie to try to pick up the pieces of his old life. Only he soon discovers that some old enemies-- Typhoon, Multiplex and one other, are back for revenge on their old foe. Jolley writes a story with surprising warmth and humanity considering the amount of power that the characters possess. He carefully goes back over old ground but also keeps the new twists and turns coming. Both Ronnie and Jason are fleshed out with neither one overshadowing the other. The art is adequate although some scenes look rather rushed while others look rather muddy. Was this an emergency fill-in job or was the art team still unfamiliar with the characters? Hopefully, the old art team will return soon and things will pick up.