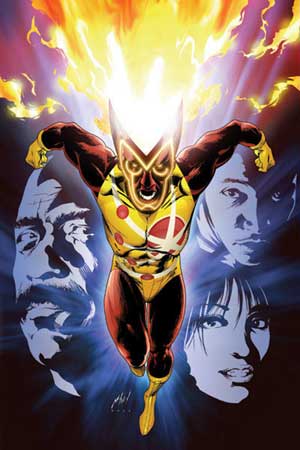 Ronnie Raymond's past continues to catch up to Jason Rusch, the new Firestorm as unexpected old friends and foes return. But perhaps the most suspenseful encounter in this story is between Jason and his abusive father. No, he doesn't kill his dad but it is clear the relationship between the two has changed drastically. Jason tries to use his Firestorm persona, both to blow off steam and help people while making all sorts of bargains with his unwilling hosts. There is rich potential for comedy and tragedy in this situation and we get to see a little of each in Firestorm's conversations with himself. This series continues to be character-driven, perhaps excessively so. Jolley does introduce us to fascinating new characters each time-- like the wino in this issue. But a dynamic-looking hero like Firestorm just screams out for action. Hopefully, we will get a lot of that next issue as an old baddie makes an appearance. The new art team of Igle and Stull shows promise. It isn't as exciting as the old artist but it already looks polished and professional.