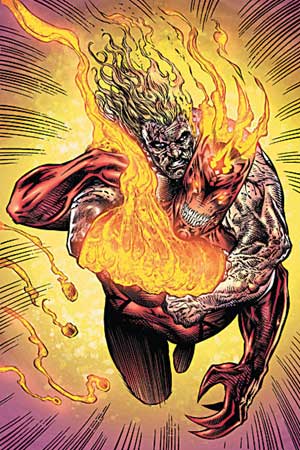 The first chapter of a two-part crossover with the BLOODHOUND comic book (also written by Jolley.) Somehow, I don't think having two low-selling comics cross over with each other is going to help either. A druglord with a grudge against Firestorm and Travis "Bloodhound" Clevanger, hunts down Jason to get the kid to lead him to Firestorm. Jason promptly merges with the druglord to transform into Firestorm-- only to discover that sometimes, he isn't the one in charge. The evil Firestorm now goes after Clevanger. Obviously, the non-powered Bloodhound doesn't have a serious chance against the nuclear man but Jolley still manages to piece together a convincing and exciting story out of this situation. The art is quite a change from previous issues. It seems to emphasize the ugliness of the world Jason lives in. It can get a bit murky at times, especially the intercutting of the scenes inside Firestorm's head with the battle on the outside. It is an interesting book but not a very uplifting one.