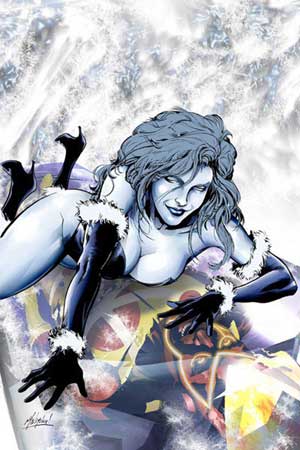 Firestorm and Firehawk take on an upgraded Killer Frost, only to discover she is too powerful and too vicious for them. It is a relief to see a title devote itself to a well-choreographed fight between such powerful antagonists. And even as the powerblasts and ice-spikes go flying, the writer doesn't forget the conflicting emotions afflicting so many of the characters. This new Firestorm is one of the best-written neophyte heroes in years, showing ingenuity and courage in using his powers while still being frightened and confused by these new threats he is facing. The art captures both the action and the emotion well and manages to squeeze a huge tale in a few short pages. There is however some excessive violence in this tale with innocent people-- including a pregnant woman, being killed practically for show. Too many comics have been resorting to this just to show how hard-core their characters are. Marvel was particularly guilty of this once and it seems to be spreading to a lot of DC books.