The Ultimate Marvel Legends Captain America appears in Marvel Comics' alternate universe begun in 2000 to introduce classic characters to a new audience. Captain America appeared in the first issue of the Ultimates, the alternate version of the Avengers. That first issue highlighted his World War II career. In the next few issues, the Captain, freed from his ice prison, reinstated the modern world and took the field command of the Avengers.

ToyBiz modelled this figure on the modern version of the Ultimate Captain America, featured in the pages of the Ultimates' comic book series. There are no wings on his mask and he sports leather gloves and boots. He has an army styled utility belt and stitches on the front of his thighs and his mask. Two American-styled stars are on his shoulders. His mask has cheekbones bolts similar to the Flash's.

Sculpt
ToyBiz is improving all its sculpts after years of receiving criticisms. Although the Captain is hunched, he stands strong and ready to take any opponent. Instead of using painted decals, like the earlier Marvel Legends Captain America from series One, this figure's chainmail is sculpted on its chest and shoulders. That's really groovy. There are several folds on the Captain's pants and shirt.

Toybiz is also improving their paint jobs, although Captain America's face seems dirty. It's hard to tell if it's by purpose, as a smudge effect of if the paint coat is not thick enough to cover the base blue plastic. Fortunately, there's no bleeding on the stripes on Captain America's abdominal and back. Toybiz is an expert at faking used leather. There are dark blue tones on the pants and the torso of the figure.

Stability
This figure is stable but will stand better on the action figure stand that came with it. It's toes and ankle articulations loosen easily. Its large torso and hunch back makes posing difficult too. The action figure stand has a new clear plastic arm with a peg that fits in the figure's back. Although enabled with multiple articulations, it's not strong enough to lift the figure of the ground on its own.

This figure has 42 points of articulations. The neck has two articulation, although the figure's head is not ball-jointed. The shoulder has an improved double articulation similar to earlier Toybiz but with greater cared paid on masking the cuts within the figure. It allows the figure swing its arms inward. The elbows the knees, the ankles have double articulations. Other articulations are located in the abdominal, the waist, the biceps, the wrists, the hips, the thighs, the calves, the toes. Each fingers can move.

Plastic
The plastic has improved somewhat and seems more durable than other Marvel Legends figures. However, articulations loosen fast. Rubber is used for the utility belt glued on the Captain's waist.

Captain America comes with a round shield with strings made of fabric that fit on his arms. It's the same shield used for the first Marvel Legends Captain America released in Series One. Inside, there's a clip to fit the shield into the figure's arm. The clip was bended, so I didn't release it fearing it could break. However, even when closed, it will fit around the pockets on the Captain's gloves.

Diorama
The action figure is styled as a giant shield with the coat of arms of Captain America. Bullets holes are visible. Instead of the clear plastic arm that one attaches to the base, an American flag would have been better. The peg hole is too wide to use an existing flag pole, like the one from the first Marvel Legends Captain America or from the DCDirect Modern or Silver Age Superman action figures.

The figure come in a clamshell that can only be opened using scissors. Inside, there's a card stock with a short bio on the Ultimate Captain America, a power grid with stats on the hero's abilities and images of older other figures from the line. The figure also comes with a poster book filled with images of both the Ultimate and the Classic Captain America. Most is taken from covers of books. Watch out for the trading card featuring a new Marvel Comics game from Upper Deck.

This figure retails anywhere from $8 in large surface stores like Amazon, Walmart or Zellers to $25 in specialized online stores that order smaller quantities. The variant Classic Captain America is rarer and can fetch prices close to $100 in some auction and some retail stores. 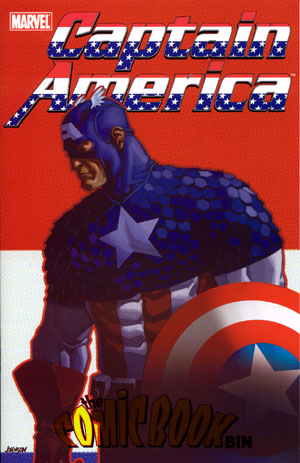