Iron Man has had several battle armours since his 1963 introduction in Tales of Suspense #39. Although there have been other Marvel Legends releases of Iron man, it's the first one where he sports his current armour. Better known as the 21st century variant, and first appeared in Iron Man Volume 3, issue # 50, in 2002. It's also one of the best iron Man figures ever. Marvel Legends action figures are really improving.

It's very difficult to determine if the armour is exact because artists often take liberties with Iron Man's armours. Some features worth noting are the satellites dish-shaped shoulder pads, the partial thigh covers extending from the boots. There are two shoulder plates on the figure's back, which is absent from all the artwork surveyed. The oblique abdominal are gold-coloured instead of red, like in the comics.
Sculpt

The sculpt is great and sturdy. It's easy to put Iron Man in a flying pose. The shoulders are built much like the Ultimate Iron Man, in that they extend outside the figure. Because there the satellite dish shoulder pad cover this area, it doesn't look bad. This is one figure where most articulations are hidden or look natural because of Iron Man's armour. The elbow joints are bent. It's difficult to say whether it's natural or a defect.

The paint job is good. Toy Biz added some metallic sheen on the crimson areas of the armour. The coating is thin and will fade very quickly if you play with the figure. Instead of using pure gold, Toy Biz painted the other parts of the armour with a dirty canary-orange mix and added sheen. It looks good, although it doesn't cover the base plastic properly. Tony Stark's face is clean and has some shading.
Scale

Marvel Legends action figures always fit with each other. Iron man looks good with other figures from his wave, such as Captain America. However, the figure looks awkward next to the Marvel Select Ultimate Iron Man. It is too small.

This figure is stable, although using a figure stand is recommended. The figure's weight is balanced and the legs strong enough to support the figure. The feet are not flat, but the soles are well designed. Toy Biz did not drill the figure's peg holes properly, which means that the figure cannot fit well within the diorama provided. Even if the peg holes were correct, putting the figure on the diorama would be difficult, because it is crowded.
Articulation

Toy Biz continues to use cheap hollow plastic that may help with the figure's stability, but is not resistant over a long time. Kids will destroy Iron man very easily. Also, the more one plays with the articulations, the more they will loosen.

The figure comes with a large wall mountable stand shaped like a wall that Iron Man's reflectors have obliterated. There are four stumps of Ultron, the Avengers' arch enemy, lying on the floor, as if Iron Man had just fought them. This is a great diorama, but as stated above, the spaces where one puts Iron Man's feet are too small. If the Ultrons stumps were removable, it would be easier.
Props

Besides the action figure stand and the removable mask revealing Tony Stark's face, the figure comes with a comic book-sized poster magazine and a trading card. Although these are not usual props, they add much value to the figure. The poster book has several images from recent Iron Man covers or other comics featuring him. I would have liked a comic book because it encourages collectors to check out the regular series.

As usual, Marvel Legends figures come in a clear big plastic bubble that one can open only with scissors. The card onto which the bubble is glued to has improved compared with earlier releases. There's a full bio of Tony Stark on the back cover and images of the other figures of this line, including variants. On the front cover, there's a Marvel Comics' offer for some free Ultimate Spider-man comics if they subscribe. 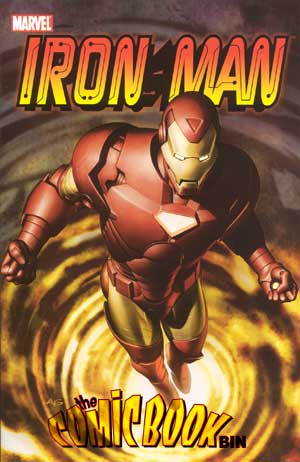 Depending on the store, online or offline, this figure will cost anywhere from $8 at places like Wal Mart or Amazon.com up to $25 in some specialty stores. Shoppers have a variety of place they can check before buying this figure. Also, several fans exchange figures on several Website, even at The Comic Book Bin.

Released at the end of 2004, this figure hit large stores and distributors earlier. Stores ordering through Diamond Comics received the figure a month after. Iron Man is not a chase figure. There are on average two in every case of twelve Marvel Legends Series 8. Although one of the best Iron Man figures in years, the fact that there was a recent release of the Silver Centurion and the classic Iron Man a few years ago, means that the figure is not a most sought after character.