Is Black Canary a Second Stringer? 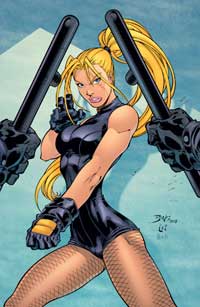 Many complain about the bad treatment Black Canary has received in many comics before the arrival of Gail Simone as the writer of the Birds of the Prey, the series she shares with Oracle. The big reason for the mismanagement and the problem some writers have when dealing with Black Canary is the retroactive continuity deal, she's been dealt since the old JLA and Crisis.

In the classic JLA, Black Canary was experienced and proficient. However, splitting the younger character from her mother removed much the accumulated experience earned in the classic Justice Society of America series. She did act competently after it was revealed that she was the daughter of the original, however, there was always something hollow and missing.

With Crisis, DC inserted Black Canary in Wonder Woman's place. Although some argued that it was good for the character, it also caused her some damage. Black Canary became a founding member of the League, but unfortunately, there are very few portrayals of this period. Therefore, her top position in the DC Universe seems hollow, just like in the pre-Crisis days.

When writers deal with Black Canary, very few of them built up on the expected continuity and recognition introduced Post crisis. Most work with the character as is. I would say that writers like Chuck Dixon and many others, simply treat Black Canary like they would treat the Huntress or Katanna. A good character, not a second tier Leaguer.

Speaking of second tier Leaguers, with the influx of members from the League in the 1980s and 1990s, the value of a JLA membership has diminished. For many, having been a classic Leaguer doesn't hold that much power anymore, since Fire, Blue Beetle and Maxima have all been members of the League while lacking the iconic requirements. 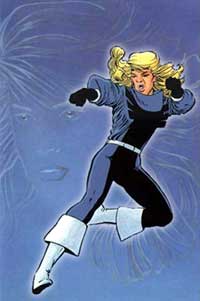 Perhaps if Black Canary had not been a member of Keith Giffen's League right away, it would have preserved her credibility. I'm not talking about the humourous twist of the JLI. I'm talking about who got in after the end of Detroit and the Classic team. In that book, there were only three originals, Batman, J'onn and Black Canary.

While Bats and J'onn were the big guns and senior members, Dinah was nothing but one of the legs, like Booster Gold and Guy Gardner. She wasn't special. Batman snubbed her when he said the Martian Manhunter was the only one he didn't have to babysit. Moreover, she didn't even sport her iconic costume. Without this suit, she lost more seniority and recognition.

When Aquaman and Hawkman appeared in the JLI, it was an event. Black Canary's presence wasn't. When Aquaman returned in Jones' and Jurgens' teams, he was part of a triumvirate with Hal Jordan and Superman. The writers introduced them as the senior members rescuing the League. Black Canary's brief appearance in the European branch was too short to achieve similar results.

I would argue that even Wally West, the Flash lost some of his lustre by being in Giffen's League. However, thanks to his series and other appearances, he wasn't as damaged. As a former Titans, he could only grow, not devolve. Black Canary in Giffen's JLI devolved. Not because of her characterization, but just because she was there.

Now that we've got a top seven hierarchy in the League, there's been a redefinition of what it means to be a member of the JLA. Unfortunately, Morrison excluded Black Canary from that team. Had she been incorporated, like J'onn as something like the "second" woman, things would have been better for her. 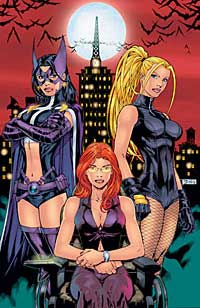 In the Justice League cartoon, Hawkgirl plays the role of the second woman. It has boosted her popularity. Some fans don't like alpha characters like Wonder Woman. For them Hawkgirl is the perfect foil to Wonder Woman. She acts as an underdog and more down to Earth alternative to the Godlike Amazon.

Having Wonder Woman as the only female Leaguer for so long, makes it difficult for others to gain as much credibility. Black Canary broke that hold in the classic League and the Justice Society but it hasn't happened again, The only women, who could break that hold are Zatanna and Hawkgirl. Zee is popular and Hawkgirl's membership in the televised version has helped her.

Other writers put Black Canary in the JSA. Although that was a good thing for the character, as it reinforced her prime role in the DC Universe, the effort was useless. The writers didn't use Black Canary as a foil for the noble senior Wonder Woman. The younger Hawkgirl was more brash and a better counterpart to Wonder Woman. In that series, Black Canary was but wall paper.

Now, here's the fun part of the Black Canary dilemma. A whole generation of readers has accepted the Justice League's founding membership as gospel. They keep alluding that as a founding member, she deserves a superior level of respect. The only reason Black Canary is iconic, is because some editor decided so after Crisis.

In hindsight, making Black Canary a founding member of the JLA was a mistake. It stopped her from growing into her role naturally. She didn't earn her credibility on her own. She had a boost from the Crisis. Powergirl suffers from the same thing. Batgirl used to have a similar problem but her growth in the Suicide Squad and her adoption into the Bat-family have fixed that. 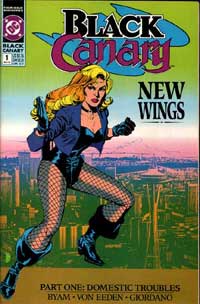 Black Canary has never had similar exposure. There was an attempt to do so in her own series from the 1990s, but it was a failure. This series treated Black Canary as a competent fighter, a detective and there was zero hint of the dumb blonde stereotype which I believe are real, even in Gail Simone's Birds of Prey. However, the 1990s' series was bad.

Few people read it and although the Canary could defeat any opponent, the artwork was ugly and the stories did not make sense. In the series, opponents, Nightwing, the Huntress and Green Arrow treated the character with respect. There was no doubt that she was more experienced than Nightwing or the Huntress.

However, Sarah Von Byam ended the series in the worst possible way. Worst than the butch look she introduced, there was the damsel in distress in the final story where a former buddy of her mother saved her. They even French-kissed! I have a feeling Byam wrote this story as a joke or to make fun of her editor and fans. Perhaps, the editor rewrote the issue.

To this day, we still don't know what part of Byam's series is in continuity or not. No one has referred to events or given her similar respect in other books except Mike Grell's Green Arrow.

Much of the dumb blonde criticisms come from Chuck Dixon's work. Although I used to hate how Chuck treated Black Canary, I have to admit that he treated her the same way most writers had. What Dixon did, which is very characteristic of the way he writes is to make characters weaker, so they can overcome challenges more realistically. 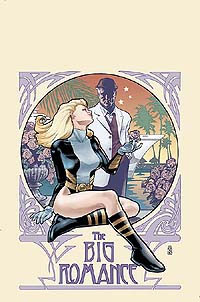 Compare some of Byam's writing in Black Canary with some of Chuck Dixon. In Byam's stories, there is no doubt that Black Canary will prevail. She is the alpha woman. Everybody say she's dangerous and competent. Even when she's jailed, she acknowledges that she could escape, if she wanted to. This is similar to the current Batman and how Simone wrote Oracle recently.

In Dixon's stories, we never get this comfortable with characters. We know she's good, but we never know if it's enough to prevail. In the first Birds of Prey story, Canary faced Lynx, a cipher for Lady Shiva. Lynx is a female Asian master martial artist. Black Canary takes a severe beating from her. Dixon shows the character overcoming dangerous odds.

Dixon has problems with delivering outcomes. When Black Canary defeats Lynx, it's off panels and in a limited space. We never see how good she is. Other times, Dixon had other characters step in to help Black Canary. When Dixon pitted the Canary against Shiva, she ran away! She doesn't win the fight by being the last one standing. For many fans, this is heresy.

Gail Simone's handling of Black Canary is perhaps the most puzzling. From the beginning, the writer has stated that she would give the character all the respect she deserves. Recently, she even stated on a message board, that she perceived the character as the second female of the DC Universe. Her job is to get her there.

The first thing Simone did was to put the character in a situation very similar to the worst one she had been through in her history, her abuse and torture in Green Arrow's Longbow Hunter mini-series. In that series, villains captured and tortured Black Canary for several days. Later she lost her canary cry and became sterile. In Simone's first story, she is tortured and held captive. 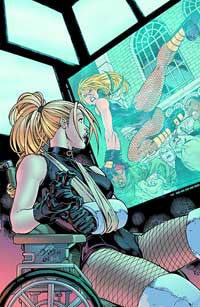 This time however, it was stated that she didn't panic and that she was in control. It's almost as if Simone were trying to rewrite history and avenge a wrong done to the character in the Longbow Hunters. Whether or not this is the case, the result has propelled the character forward again. In her second arc, Simone explores Canary's fighting skills, but introduced another dimension.

Canary is caught in the middle of Lady Shiva and the equally dangerous Cheshire. The emphasis here is not only on physical prowess. It's also on the personality of the character. Instead of focusing on a cerebral skill, like her detective abilities, Simone focused on her personality.

The Black Canary is perhaps the last of the great second string characters from the classic Justice League to receive an original personality. Sure, there were always some sparks, but honestly, as much as I love the character, she has been as boring, personality-wise as the Silver Age Hawkman or Barry Allen.

For a long time, writers treated her as a new character created after Crisis, or one of the top DC Universe heroes, which by virtue of that was good at everything and could not fail. The only personality we saw was when she faced situations, like her abuse. What personality the character had before Simone came on board is hard to tell.

In JLA Year One, she was a spiky young woman who liked glamour. In her series, by Sarah Von Byam, she was a tough fighter with a tender heart. In most comics, she was Green Arrow's girlfriend. It's still difficult to guess where Simone is going with the character. Black Canary is receiving a character upgrade, much like Will Pfeifer's Aquaman or Geoff Johns' Hawkman. 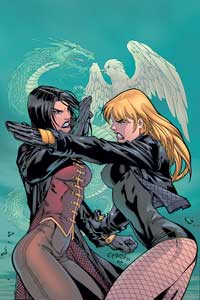 There are shades of grey, hints of a soul, but there's something I can't catch. I believe female readers do get it. Although it's painful for male readers, it's a good thing for the character. Very few super heroes have similar personalities. Simone is developing Black Canary much like Mike Baron wrote Nexus.

There is a soul within the character, but it doesn't come through in the actions and challenges that affect them. It comes through their very being. I apologize for lacking better terms for explaining this. Men have limited vocabulary. Wonder Woman doesn't have that. Whatever personality she has, comes through her actions. She's written like a man.

DC Comics should continue to experiment with Black Canary. I see the potential of a soul, much like Nexus,'Daredevil's, or Marvel's strong women like Jean Grey, Storm, Invisible Woman and the Wasp. I just hope Gail Simone can help guys like me understand what Black Canary is all about.