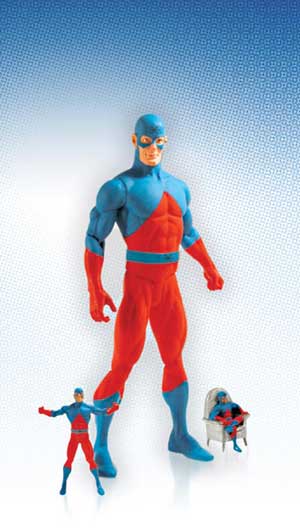 Although a classic Justice League character, The Atom's size has often limited his appeal as a potential action figure. The first Atom action figure by Hasbro is nearly impossible to find, but who cares? We've got DCDirect's perfect version instead. Besides the small articulated Pocket Hero action figure, this is the only Atom action figure by DC Direct and it will remain the canonical one for years to come.

The action figure depicts the classic Atom character. Except for his Jungle period in the Sword of The Atom and the Power of The Atom series, the Atom's costume has remained the same. And even in the above-mentioned series, only his face mask changed. The height of the boots may vary from period to period though.

The sculpt is great. The Atom is smiling, confident and ready to take on a fun challenge. He stand with the left hand as a fist and the right one open. It's a perfect mix for a scientist. The Atom's ears are wide apart which make him look like a even more of a smart Alec. The Atom's legs and arms seems to be based on one standard sculpt used throughout the JLA Wave Two, the JLA Flash and the JLA Aquaman.

The paint job is perfect. It's hard to mess up such a simple costume. His gloves and boots are polished which is always a great gesture. The face paint should have been thicker, as there are some blue highlights hidden in the Atom's jaw. The Atom symbol on his face mask and belt could have been darker and more visible.

Like all the figures of this series, the Atom is larger than older Silver Age period action figures. Next to the Silver Age versions of the Flash and Green Lantern, the Atom will look very tall. It's only in recent years that the Atom has demonstrated that he could remain in costume at normal size, so if his size annoys you, put him away from other figures, and use the tiny version of the character included in the package!

The Atom is extremely stable. He has flat feet spread apart and is not too top heavy. The smaller Atom falls easily. Use some blue gum to keep him put, on the action figure stand provided for his larger counterpart.

The Atom has nine articulations at the neck, the shoulders, the elbows, the hips and the knees. His shoulders and neck are ball-jointed. The head's motion is very similar to that of the Silver Age Flash or the modern version. He can look up while shrinking, just like in the comics. The only problem is that his shoulder articulations won't allow him to replicate the pose of his tiny version. They are stiff and limited.

DC Direct continues to spoil us with better plastic. This one is sturdy, like older figures, but won't catch dust as easily and does not stink. The smaller Atoms are made of similar plastics.

There are two smaller Atoms included in this set. The first is as high as the larger Atom's calves, or about two inches and a half. His arms are wide open as if he was shrinking. The other Atom figure is smaller but permanently glued on the hovering chair he owned in the Justice League comic books. His left leg is crossed on top of the right one, while his arms are resting on a arm rests. Too bad the JLA table is not included! 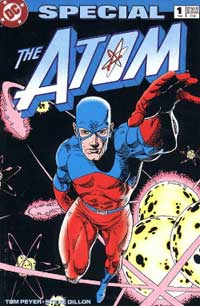 DCDirect reuses the same packaging for all figures in this wave. Only the interior bubble changes. The back of the card features pictures form the current wave and a head shot of the previous JLA wave.

DCDirect's prices have gone down in the last year. This is good for fans. With this wave, we are seeing improved quality for a better price. Of course, since the first JLA wave and the Modern Superman figure released in March 2003, DC Direct action figures are more popular. With greater number comes better manufacturing prices.

It is estimated that DCDirect has manufactured at least 8750 for master cases. Adding individual orders for the Atom or inner cases, there could be as much as 12,000 Atom action figures which is is not even the run of a bad selling DC comic book series. It's also far inferior to the numbers estimated for Hush Series Two action figures. Next to Firestorm, the Atom is the most popular figure of this wave.

The individual version of this figure has sold out from Diamond Comics, the exclusive distributor of this action figure. It is only available from Diamond when purchased trough an inner case with the other figures of this wave.