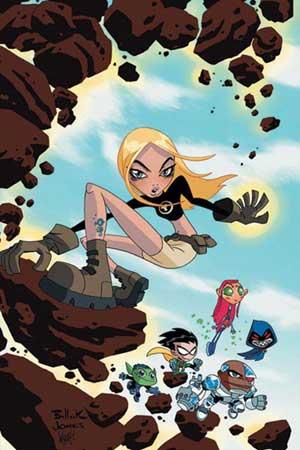 This issue has a story apparently set in the past of the animated "TEEN TITANS" continuity. The character of Terra, who betrayed the Titans in the cartoon, is shown here at a time when she was still a full-fledged, trusted member of the group. It is a bit puzzling how the writers of this series will work Terra's betrayal into the comic since the cartoons showing the character's treachery and downfall have already been aired. Still, Torres does come up with a rather serious tale in this issue. On the surface, it is just another fight between the Titans and Slade's robots but it also shows how well Terra charmed her way into the Titans' hearts, giving the whole story a rather tragic tone. Nauck's art captures both the dark and light aspects of this story. We may not actually see Terra turn against her friends in this comic but at least the gravity of her action becomes more apparent.