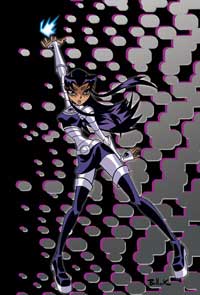 Starfire's sister Blackfire returns, claiming to have given up her evil ways. Starfire and the rest of the Titans surprisingly accept her. But now, Starfire feels she has to prove she is as good as her sister and engages her in a prolonged and violent aerial race. This isn't a very complex story. The plot may seem a bit contrived to show off Starfire's sensitivity and her feelings of inferiority to her sister. But the creators still manage to work in some clever action sequences with almost all the Titans showcasing their different abilities by taking on Blackfire. The real highlight of the issue is the art by Nauck and Strucker. Although they are limited to following the style of the animated show which inspired the comic, they still give the story their own unique stamp, providing dynamism, excitement and depth not usually seen in the art of the "animated" line of comics. They clearly deserve to be put on bigger projects.