The Golden Age Starman continued DCDirect's tradition of including a light mechanism inside the figure. It arrived in 2000 with the first wave of JSA figures. This wave of figures has been the benchmark for many waves after. The Golden Age Starman came after the modern figure and shared the same light-up gimmick when placing his staff in his hands.

This figure is very similar to the Murphy Anderson designs introduced in the classic Brave and the Bold Stories with the Golden Age Black Canary. In some stories featuring Starman, however, his ears plugs are yellow. In these same stories, a white circle surrounds the star on his torso. The rod's design varies frequently too.

Starman's sculpt is good, although many fans do not like his bent head. It looks much better when one twists it to his left. His pose is straight and stiff. His left hand would have looked better had it been more relaxed. Starman's face is impressive, as are all of Tim Bruckner's sculpts. Starman's legs look small compared with his large torso. He's like a body builder who overtrains his upper buddy.

Paint
The base plastic of the figure seems red, although it may be green. That makes paint applications very simple. There are few details on Starman. His torso's star is carved in so it's easier for painters to colour it. The face paint and details are clean. A problem with Starman's paint application is that not all red and green parts are from the same moulds. Therefore DC Direct used paints that don't match perfectly.

Starman fits well with fellow JSA figures such as the Golden Age versions of Green Lantern, the Flash, Dr Fate, Hourman, Dr Mid-night and many early Silver Age figures like the Flash, Superman, and Wonder Woman. Starman looks good next to his son, Jack Knight, although their style is different. Starman is about six inches tall. The Shade is much taller and doesn't fit very well with him. 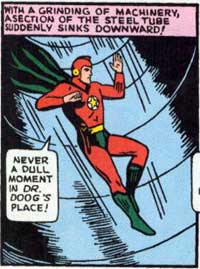 This figure is very stable although he doesn't look like he is. It is one of the few DC Direct action figures with ankle articulations that don't fall constantly. Starman's torso is hollow, because of the battery mechanism that fuels his rod.

The Golden Age Starman has eight articulations at the neck, the shoulders, the hips, the left elbow and the ankles. Because of the wiring inside his right arm, only his left side's shoulder has a ball-joint. The entire arm is stiff because of the wiring. Starman's rod fits in a holster glued on his right thigh. His cape is removable and fits with pegs. To change the batteries, there's a small and fragile case in the figure's back.

Much of Starman is hollow plastic, lighter than the stock used for other DC Direct figures from this period. Be very careful with the case in the back of the figure. It is extremely fragile and breaks easily.

Starman's rod lights up when pushed completely in his palm and inserted through the fold in his hand. The prop is in translucent plastic although the base has gold paint. 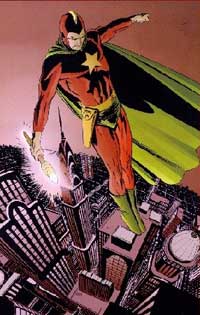 Starman comes in a blister pack with images of the other JSA characters released in the same wave.

Starman's retails for the usual DC Direct price. Price varies at every retailer because DC Direct doesn't suggest any price.

This figure has sold out from Diamond Comics, the exclusive distributor of this action figure.