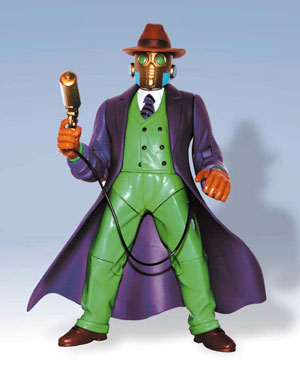 The Sandman's comic book series has been one of the most critically acclaim series for DC Comics although the action figure based on the original character bearing the name has received lukewarm response thus far. When Neil Gaiman's groundbreaking Sandman revived interests the Golden Age character. This must explain why the Golden Age Sandman was one of the earliest DC Direct figures.

There are two versions of the Golden Age Sandman action figure. The first is based on the work done in the Sandman Mystery Theatre, an indirect spin-off of the Neil Gaiman series. It revisited the early life of the character. Under the gas mask, the character has chubby features, just like Guy Davis illustrated him. The repaint version of the figure uses the traditional primary colours from the Golden Age strips.

The character is in a prepared stance, ready to shoot his enemies with his gas. gun. This figure's block-like sculpt is the major fault of this figure. It feels like an old Masters of the Universe action figure. The other problems are the out of scale arms and the large hands. The figure's only redeeming quality is the excellent face sculpt that gives the character so much originality. 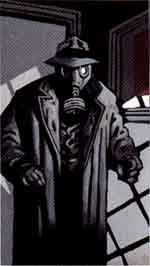 Establishing whether the Golden Age Sandman action figure fits well with other JSA characters is difficult. He is sculpted as a larger chubby man. That makes him look off when compared with the likes of Golden Age Hourman and Green Lantern. However, he is of appropriate height with them.

This figure is stable but does falls easily if hit accidentally. The cape helps maintain his balance. His flat soles help also. The repainted version has a peg hole in the left foot. 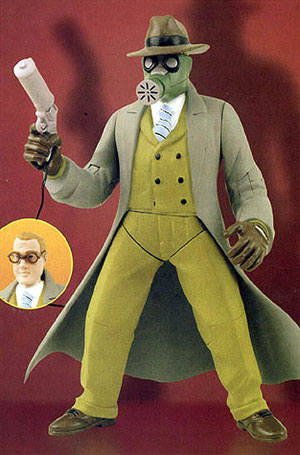 The Golden Age Sandman has twelve points of articulation at the neck, shoulders, elbows, wrists, waist, hips and knees. Most of the articulations are useless. His hips' articulation is v-shaped. There is not much one can do with it, except stabilizing the figure in place. Since his elbows are already bent, the articulations don't add much posing. The figure's rain coat blocks the waist' articulation.

The Golden Age Sandman consists of good durable plastic different from the stock contained in most DC-Direct action figures. It will not yield to warm summers.

The Golden Age Sandman comes with a gas-gun, a pipe connecting to the gun, glasses and the figure's waist, a removable hat and a gas mask. The hat should have had a peg bar that could be inserted into a peg hole in the figure's head. It would have made it much more stable. To put the gas mask on insert it from the bottom of the figure's chin. The gas mask's paint residues may discolour your figure's face.

The figure was packaged in a blister pack with a card.

The Sandman action figure used to cost the same price as other DCDirect single packed action figures. However, deals are available on the second version of this figure all over the place. Retailers tend to want to get rid of it. For the first version, the secondary market determines the price. 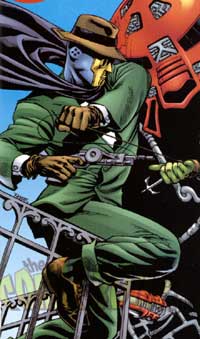 Neither the first nor the second version of this figure are available from DCDirect or Diamond, the exclusive distributor of DCDirect products. However, some stocks exist in several stores on and off the Internet. The first version of the figure is the rarer and the most sought after by fans. It has a unique gas mask. The other version, while accurately portraying the original looks of the character is less sought after.