Although several sources claim that G.I. Joe has been the most successful action figure line for young boys, the cartoon series have been even more popular. The two mini-series collected on The G.I. Joe a Real American Hero! DVD collection are A Real American Hero, the first G.I. Joe cartoon series released in 1983 and The Revenge of Cobra, the second mini-series that aired in 1984. The booklet in the DVD explains much of the history behind the cartoon series and its links with the comic book, the commercials and the action figure line. G.I. Joe was the first action figure toy line for boys. Hasbro created it the 1964. At the time Joe was a generic military character without any opponents. The action figures were twelve inches tall and articulated.

Inspired by the 3/4 size Star Wars figures, Hasbro converted its successful G.I. Joe franchise into a similarly scaled action figure line. This time, the smaller toys would had an opponent, the terrorist organization known as Cobra. Cobra was not a specific country or a group. It was a new fictional enemy. However, the Joes were still American.

Each action figure was unique. They were not the standard Joe. They each had their personalities and functions. To promote the new line, Griffin Bacal, Hasbro's advertising agency, proposed that the toy line be supported by a comic book series, commercials for the comic books, a cartoon series and commercials for the action figure line. Hasbro adopted this mixed marketing campaign.

Commercials for the comic book series published by Marvel Comics began, It was the first time a comic book series was advertised on television advertising. The toy line began and was also supported by toys. Both appeared in 1982. In 1983, the first five-part cartoon mini-series began appearing on television. The show was syndicated, which allowed it to by pass the strict guidelines for series aimed for children.

In A Real American Hero, a mix of early 1982 characters and newer ones from 1983 appear. Duke who belonged to the 1984 series also appears as the main protagonist. The story focused on Cobra's Mass device, a machine capable of teleporting armies, buildings and military gear anywhere in the world. Three rare elements fuelled the device. The Joes and Cobras raced each other to gather the elements.

This storytelling device allowed the creators of the shows to split the characters into teams, which allowed them enough exposition of their personalities and functions in their respective camp. Obviously, this strategy allowed kids to identify with each character and pick favourites. Kids then pressured their parents to find their pet characters at the toy store!

This ploy probably worked, because the next G.I. Joe mini-series, airing the next year, repeated the storytelling device with a carbon-copy plot the first series. This time, both the Joes and the Cobras had to retrieve pieces of a weather controlling device dispersed as into three parts in exotic locales. Again, specialized teams recovered the elements in a jungle, the arctic and a secluded island.

Whereas the first mini-series had to introduce each character, this one barely showed the old favourites. The new guys took the lead. The cartoon introduced Hasbro's new toys and characters to kids forcing them to "update" their collections. This formula was probably the key marketing trick created by Marvel and Sun Bow, the animation studios producing the cartoon series.

The strategy developed by Griffin Bacal for Hasbro was copied by several other toy manufacturers during the 1980s with varying success. By the end of the decade, the quality of the toys, the stories and the animation diminished. Originally, tenured Japanese studios like Toei created all animations. Now, cheaper animation studios from South Korea and other Asian countries worked on the animations.

Governments reinforced broadcasting rules for children programming. It halted the progression of exclusive toy-based television shows. Toy-based shows were legal, but broadcasters began requesting more educational contents restricted displays of violence. In response, producers hired psychologists to verify the contents of television shows to guarantee that they were safe for kids. 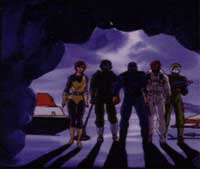 Psychologists, broadcasters, governments, are not writers and artists. When outsiders edited and monitored the creativity of the real artisans, cartoons stopped attracting kids. Simultaneously, toy makers, began watching the contents of the cartoon series more closely. In the past, they their interventions were limited to asking for the appearance of specific characters and vehicles and sets in the shows. Now, they went further.

Toy makers began thinking of themselves as creators and anything that would portray their properties negatively was edited. The back story and space that existed in the past were squeezed out and the series stopped attracting older kids. The generation of kids that grew up watching the toy-based cartoons of the 1980s grew up and became adults.

Spoon-fed original contents in the1980s, much of the material produced thereafter left them disenchanted. Occasionally series for these big kids, such as Aeon Flux, The Maxx or Spawn would show up, but their only success was going into the extremes not seen previously. The catch was not enough to sustain their interests. Only series going in total directions, such as The Simpsons and Ren and Stimpy caught on.

In the late 1990s, a new wave of material based on nostalgia about the glorious 1980s developed. G.I. Joe was at the forefront of this movement. The franchise had survived the 1990s by catering on the generations that had come before the 1980s' kids. The twelve-inch action figures were back. Hasbro released generic characters without any distinct personalities and only differentiated by their military expertise.

Hasbro and Kid Rhino, a specialized manufacturer and distributor of home-based entertainment caught onto the new nostalgia-based demand for the 1980s G.I. Joe line and began releasing many episodes on video tape. There has been success with the home video and DVD release of the G.I. Joe Movie, the new 3/4 line, containing a mix of old toys, variants, and new toys and the new G.I. Joe's comic book.

Unlike other restored 1980s cartoon series, such as Hasbro's The Transformers, G.I. Joe’s restorers found better source prints that resulted in a higher quality output on DVD. The extent of the restoration has also been tamed. In the Original Transformers DVD, containing the More than Meets the Eyes mini-series many scenes had been edited to such an extent, that hardcore fans boycotted the set. 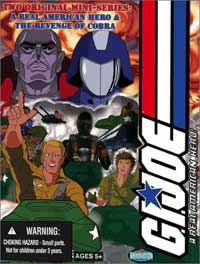 Characters were removed. Backgrounds were changed. Colours were re-coloured. Sounds were re-mixed and so on. The original series was not exactly original. In G.I. Joe A real American Hero, none of those problems occur. The sounds and colour are fresh and elements were left untouched. However, there are some square artifacts that appear occasionally.

The first DVD edition of A Real American Hero, released in March 2003, contained no extras. The new edition reviewed contained interviews with writers Ron Friedman and Marv Wolfman, each, on one disc from the set. The interviews are very informative and give fans lots of insight on the creative process behind the cartoon series. What's interesting about them is that they discuss the series as a whole.

I haven’t found any Easter Eggs yet. There probably aren't any. There are 5.1 audio options. The transitions and layout art used in the DVD are interesting, but their execution very poor. They are based on 3D animations. However, the textures look rudimentary and the 3D models simplistic. Check out the smoke cloud coming out of the F14 jets once the DVD starts to see some very poor visual effects.

The DVD comes with a Snake Eyes action figure based on the one sold in 1982. Snake Eyes is one of the most popular G.I. Joe characters in the comic books, the toys and the cartoons. It is not a collector's item, but it's fun that the DVD is tied with the cause of its existence. Perhaps again, Hasbro is trying to reintroduce its toy line through animation! A review of the Snake Eyes action figure is available here.