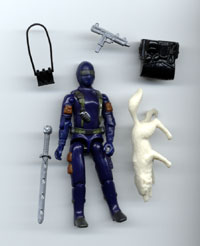 Snake Eyes is one of the most popular G.I. Joe figure from the line begun in 1982. At first a commando operative with a ninja background, he starred with the other Joes, in several comic books and the syndicated cartoon series that aired on television in the 1980s. Snake Eyes is probably one of the most popular action figure from the current line. There has probably been more version than any other figure. 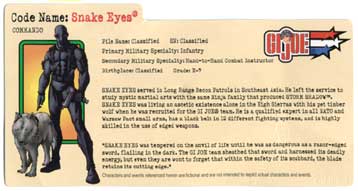 Nonetheless, shapes are simple and the naked figures features enough pockets and gear to make it interesting visually. One must also remember that the smaller scale of the figure does not allow much leverage. Also, the targeted customer of the time, young boys, did not pay too much attention to such details. They were appreciated, but their absence, would not have been caused any problems. 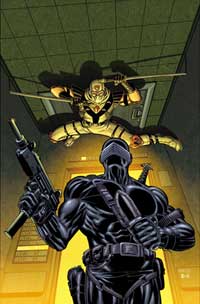 There are a few paint blemishes on the figure. As for colour variations, this figure does not have any. Unlike other G.I. Joe figures, Snake Eyes did not have a camouflage suit. Therefore, he is built from one base plastic colour. A few parts of his gears are painted. Some are painted with silver paints. Silver painted G.I.Joe figures are notorious for losing their paint fast. Don't rub the figure too much.

G.I.Joe figures have always been extremely standardized. Virtually all figures are the same height and they always fit with each other, no matter what year they were created in. Because the focus here is more on assembling a large collection of figures, rather than a character driven line of action figure, Snake Eyes will fit in any G.I Joe vehicle. The emphasis is less on the individual look and more on the collection.

Snake Eyes can stand up on his own, like any red blood G.I Joe figure. However, like several, the rigidity of the elastic in his hips and the angle of his thighs may make him a bit more difficult to pose. With his backpack on, the task may be more difficult. It is better to use a G.I. Joe action figure stand to eliminate all problems related to the figure's balance. 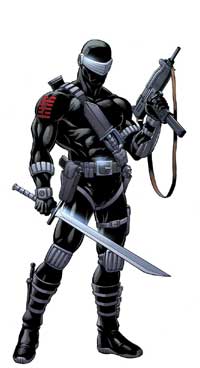 I counted twelve points of articulation on the figure. The 1982 line of G.I. Joe figures probably popularized the extreme articulation and posing capabilities of 3 3/4 action figures. They were consistent on all figures. Early figures did not have swivel arms that could rotate sideways. Figure's head also lacked the ability to nod. Snake Eyes is like that, but fans will not mind, because it is an historical feature.

The plastic of G.I.Joe figures can often be a problem. The plastic is of better quality than that of most action figures. However, there are two types of plastic. A breakable one and the soft one. The soft one lasts longer. The breakable one can splinter when figures are not stored in open areas. Often they break at the elbows. I believe Snake Eyes is made from a mix of both. Let's hope he lasts this winter.

Snake Eyes comes replicas of the uzi and pouch containing explosives from the 1982 figure. His sword is from the 1990 version. Based on information obtained from Yojoe.com, the backpack came with the 1992 Gung Ho action figure. The wolf that came with the figure is not the original one released with the 1985 Snake Eyes, as advertized by Kid Rhino and Hasbro. It is the coyote used for the 1991 Sandstorm figure. 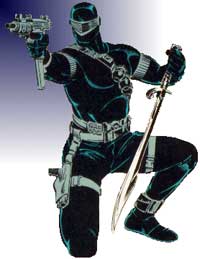 Snake Eyes came in a small bag within the G.I.JOE A REAL AMERICAN HERO! DVD. It is in the front of the box through a clear plastic box. The figure's posed allowed it to complement the DVD's package. Obviously, the design worked, since I bought the set on the spot without thinking about it.

The set's price varies. Several retailers, online and offline have differing promotions. I didn't enjoy any of those, since I wasn't even aware that the set was available and bought it the first time I set my eyes on it. Action figure retailers may not offer the best price on this DVD set. It is preferable to look at video and DVD retailers whose promotions are more competitive. Sets have been spotted as low as $26. 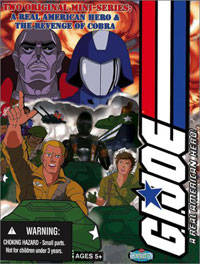 This set was supposed to be limited, although the retailer where I found it my set seemed to have a lot in stock. They had an entire display. The figure itself was available as a Toyfare exclusive last year. However, that version did not come with the wolf/coyote. Snake Eyes figures are not rare. Hasbro has released several recently and older figures as far back as 1982 can be found everywhere.

This set is really for avid collectors. The DVD includes the first two cartoon mini-series that aired in 1983 and 1984. A previous set was released a few months ago without the extras and the Snake Eyes figure. If you are not a die hard fan or can resist impulse purchases, unlike me, you can pass on this set. And get the earlier DVD collection or the action figure elsewhere.