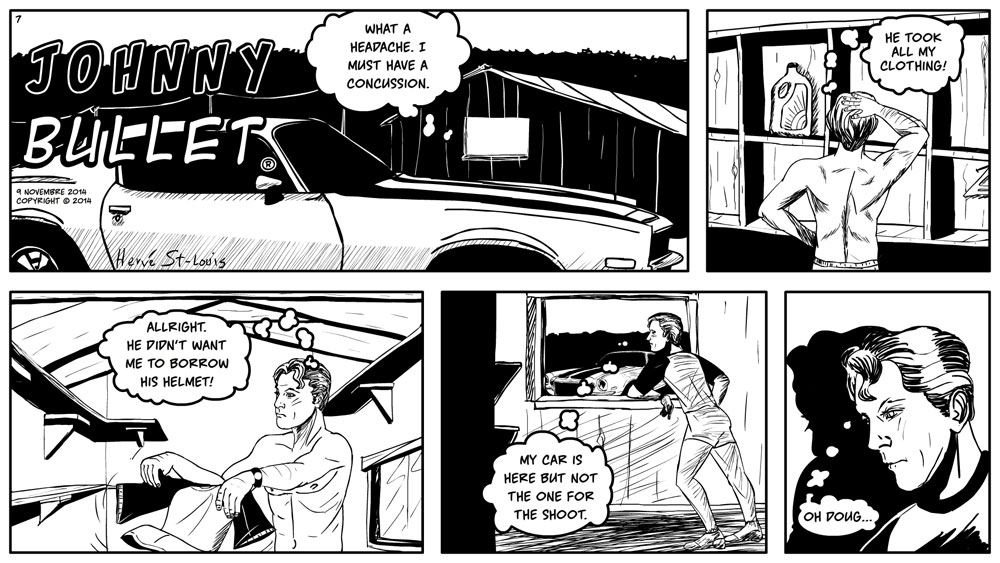 
Have a lot of work to do today such as finishing the latest Johnny Bullet page and tidying up all my grading for the class I teach. Everything is due tomorrow for the students’ final exam. I still haven’t crunched their participation marks! I haven’t been able to draw much this weekend since I’m afraid of using my Wacom Cintiq (read this week’s French’s Johnny Bullet on why – lol). I have many books to read by next week for my own schoolwork. There have been too many distractions lately and I won’t be able to produce as many strips for a few weeks with Christmas coming and a lot of other duties – again, read the French Johnny Bullet for more background!

I’m not particularly able to write the same comments for both versions of the strip. At first I tried to but it becomes repetitive. So although the story in the English and French version of Johnny Bullet is exactly the same, my comments are totally different! The few of you able to read both English and French and who even care about what I’m saying here might find this interesting. If you can’t read French, you can always use Google Translate! I tried it a few weeks ago to see if I could use it as the base of my comments and just do a quick check. It was atrocious! As smart as Google thinks it is, the Translation tool is good enough to get an idea of a text but a very poor experience and insufficient to use as the basis of a translation. I have heard that many translators rely on Google Translate in their work... Point in fact, I did use Translate and similar machine translation tools when I was translating tweets from Iran’s Green Revolution for my master’s thesis in 2009-2010. It was good enough In guess but limited. Google Translate is still limited.

I write Johnny Bullet in both English and French almost at the same time. Sometimes, I start with the English version, sometimes with the French. It’s important for me to produce both versions of the comic strips on this site. It’s part of who I am and I will not compromise on this. Each version of the strip is as authentic and authoritative as the other. I’m the perfect Canadian!

I’d like to end today’s column by saying thank you to someone special who took time to review my drawings and give me a lot of tips on how to improve Johnny Bullet in the future. Thank you very much. You know who you are!