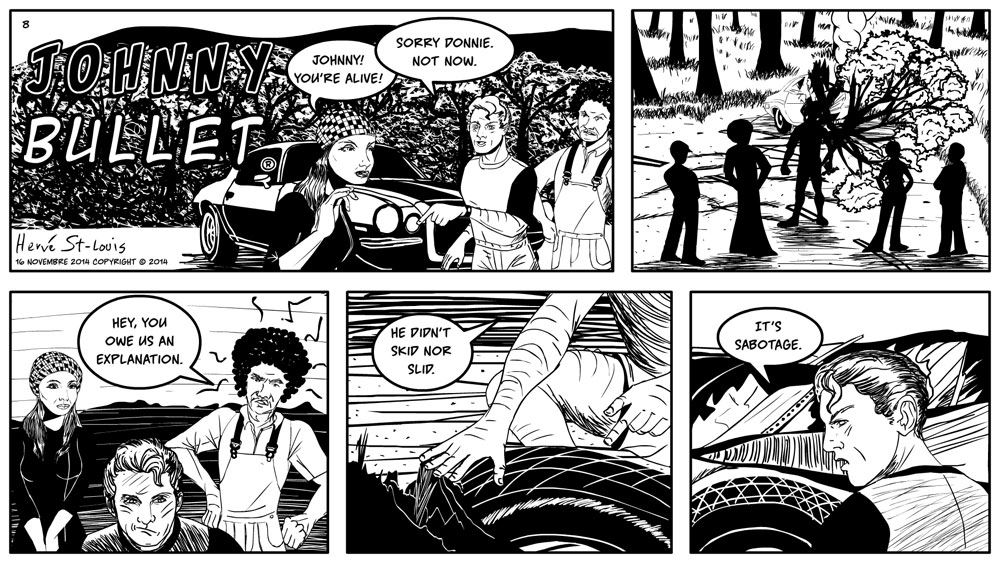 This week, I wanted to show Johnny Bullet fans and readers how I create Johnny Bullet with Adobe Flash. Adobe Flash is a vector animation and illustration tool. It wasn’t crated for comic book illustration but I’ve adapted it. The way I organize my work is inspired from the world of cartoon animation where every type of element is presented on a different layer. I like to argue that animation and y extension comic book art can be a form of information architecture. Architecture is based on the organization of elements in space. Here I organize visual elements in space and in different levels of juxtaposition in a single panel.

You will notice that character, trees, shadows, the crashed car, the broken tree are all on separate layers. I draw each layer separately and assemble them one top of another when I’m done. Because I use vector illustration, I can also preview different layers as outlines that ease my navigation through the panel when I work and draw. I can have full preview, hide or view elements as silhouette at anytime. This is very useful in my work. I always name all my layers and elements clearly even though I am the only one working on this project. Old habits diehard. It’s also something real professionals do. With a single glance of my file, any trained Flash user could figure out what I am doing and how I construct my comics.

This is the last Johnny Bullet comic strip before Christmas so I want to wish you a merry Christmas! See you next week!