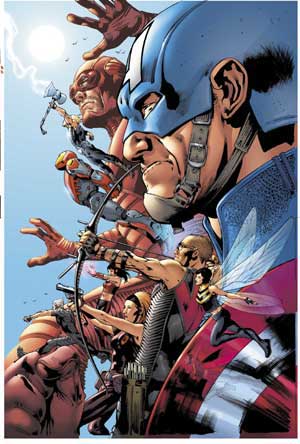 The ULTIMATES return in this BLOCKBUSTER first issue! It’s been one year since they stopped an alien invasion, and now things get hard. New members, new costumes and 12 months of gossip to catch up on! Who's getting married? Who's divorced? Who's gone nuts since we last saw them?

Millar has done a GREAT job here in laying the foundations for what is to come in this series. We see that not everything is sparkles and rainbows for the Ultimates. Internally there is trouble and externally the public’s perception is no longer the same, even after a daring mission. We see a new possible member of the team and there will be a lot of fans that will like this character. And the stuff with Thor will be making many jones for an Ultimate Thor mini series!


The opening scenes with Captain America look fantastic and especially the first page. The action is well portrayed and it show’s that Cap is all business. The whole media frenzy after that is handled nicely, with great Larry King footage. The rest of the issue is typical Hitch goodness. We get a nice shoot of the Helicarrier and Triskelion. The Pym, Banner scenes are good, as well as the Thor situation.