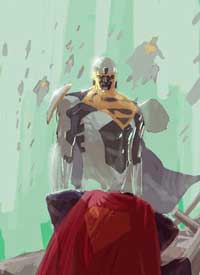 This miniseries tells the story of how Superman made his first appearance to the world at large. But in this issue, he isn't having it too easy with Luthor poisoning him with a kryptonite forcefield while framing him as the vanguard of an alien invasion. Battered and weakened, Superman still fights on against the fake invaders from Krypton, proving to the public why they should trust him while Lois goes into action against Luthor, proving why Superman should love her.
Waid can be a bit manipulative in getting readers to cheer for Superman. Having the man of steel rush to the rescue of a crying child-- ooh, how original. But amazingly, he pulls it off, using some excellent timing and some well-paced action sequences. The dialogue, while not exactly sparkling, tells the story convincingly without trying to sound clever or self-important. Yu and Alanguilan however turn in an inconsistent job this time. The scene of Superman losing his "S" and his amazing rescue of an innocent child are moving but some of their other work looks poorly rendered, especially the scenes of the Metropolis populace rallying to protect Superman. The art team is certainly very good it seems that they fell short of producing the classic that everyone was expecting.