No figure illustrates the struggle many fans have when deciding whether they favour sculpt quality or articulations and posing are better than the Hard Travelling heroes' Green Arrow. This figure has one of the best sculpt ever found on a DC Direct action figure, yet, its posing sucks big time. This action figure has a good amount of articulations, but they come in the way of the figure's posing. What's a fan to do?

Tim Bruckner designed this figure to be commemorative of artist Neal Adams' work in the classic Green Lantern/ Green Arrow series from the late 1960s. Adams modernized the character's look, added a goatee and a mustache while reinforcing the Robin Hood theme. Adams also added modern elements such as the shooting gloves and arm guards. The figure captures all of this elegantly.

This is one of the best sculpt ever of the character. He is at once stoic but boiling with angst while looking like a noble cavalier. Green Arrow's gaze, head and abdomen are directed to his left. The archer's arms are very large, suggesting the strength needed to wield a bow. His legs are spread far apart with the left foot also pointing to the left. 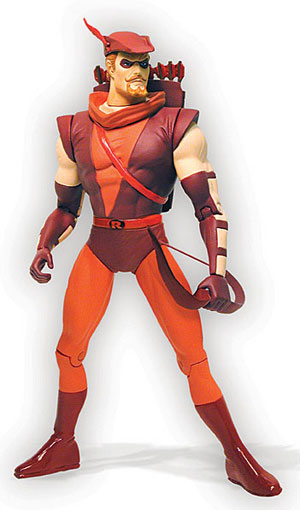 The paint job is off. The green used on most of the figure's body is too light to fit properly with the comic book version. The tunic, the hat and shorts should have the same darker green found on the gloves and the boots. This hinders the figure as there lacks contrast. Green Arrow's hair and goatee have brownish streaks that improve the figure's look. There are no highlights or tones on the rest of the figure.

He towers above most Justice league action figures. He almost seems like a seven-inch scale action figure. Nonetheless, he fits well with fellow Hard Travelling Heroes' figures Black Canary and Green Lantern Hal Jordan. He is taller than his younger Jack Kirby-inspired Silver Age Green Arrow action figure. He is off next to Speedy but it's alright. That Green Arrow has had few interaction with Speedy.

Stability is a problem with this figure. It will go on for months standing up only to start falling when the seasons change. The problem is the bad distribution of weight. Green Arrow's torso is heavy. He also carries a quiver in his back. He falls on his back or face down easily. With his left foot pointing to his right, there's nothing stopping him from falling. Early versions don't have peg holes in the feet.

The articulations on Green Arrow are useless, as they do not help his stability and do not add any playability value to the figure. There are eleven articulations at the neck, the shoulders, the elbows, the wrists, the hips and the knees. The neck articulation ruins the figure because when used, the jugular vein in the character's neck look off. The v-shaped hip articulations are only useful when stabilizing the figure.

Green Arrow contains the typical hard and stinky DC Direct plastics. You'll notice that the legs spread apart with time. I've had my figure since 2000 and have noticed the larger gap. They add to the figure's stability problems.

Green Arrow comes with a green bow and three arrows. They are the boxing glove, the handcuffs and the drill arrows. It would have been nice of the arrows were smaller and could fit in the character's quiver or be attached to the bow. Right now, they are useless, unless displayed in a wall of different arrows used by Green Arrow.

Green Arrow comes in a blister pack with pictures of the Black Canary and Green Lantern Hal Jordan standing on a road symbolizing the trip the guys had in the Hard Travelling Heroes' series. The card's art looks like a Photoshop beginner designed it. Newer releases of the figure have a cheap looking gradient pattern.

This figure is widely available. Some people often try to sell it for $20 or more. Don't buy it from them. You can find this figure for much cheaper. DC Direct still has a large stock stashed somewhere. They've repeatedly released this figure over the years. The new ones have different card stock. The figure was recently used as the first exclusive DC Direct repaint base for the Kingdom Come Red Arrow.

This figure has sold out from Diamond Comics and is no longer available.