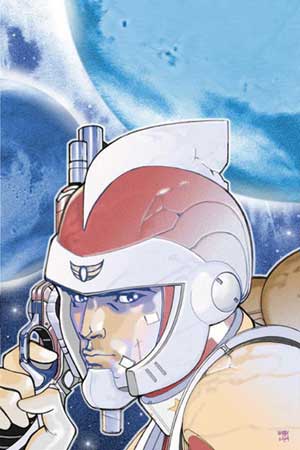 This miniseries may start off slow, with a recap of Adam Strange's origin and his somewhat complicated history but Diggle and Ferry do not dwell on this and quickly go to the meat of the tale: Adam Strange's discovery that his adopted planet of Rann has supposedly been destroyed. He falls into despair and then into the hands of the police when his apartment building is mysteriously destroyed. But don't fret, fanboys. This is not one of those revisionist tales where we discover that everything we knew was wrong and the old-time comic character is revealed to be a complete jerk. Diggle sticks admirably close to Adam's past continuity (as messed up as that is). He just shows us a new side of Adam, making him rather sympathetic. But just when you think the story is starting to drag, the alien bounty-hunters arrive and our man Strange is back in his element-- flying with a rocket pack and shooting ray guns.

This is a strong start for both Adam Strange and Andy Diggle. Speaking as someone who isn't too impressed by "the LOSERS", it shows Diggle can handle a good old science fiction/action story which revives the aspects beloved by the old-timers while making the story accessible to new readers. Hopefully, he can keep us this tone throughout the mini-series without resorting to shock tactics or weirdness-for-weirdness sake. The art is equally outstanding, showing that this washed-out style of inking can work in an action story.