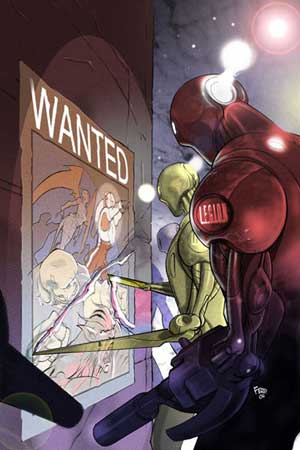 Adam Strange is still on the run, this time joining forces with what is left of the Omega Men to escape an attack by the Spider Guild. To make matters worse, the old inter-planetary enforcement arm, L.E.G.I.O.N. have been placed on his trail. The attempt to connect all of DC Comic's diverse alien races into one story is engaging but newcomers may be left behind, wondering who this green-skinned guy is and why we are suppose to be scared of him. The confusing cover, where you can barely make out the title character, does not help any. The story however does move quickly and the art, while sometimes lacking in clarity, is exciting. They even found a way to make ray-guns look and sound like magnum pistols. Sadly, there is still not enough of a recap to tell new readers what is going on. But at least they will know that Adam Strange is not a guy to be trifled with.