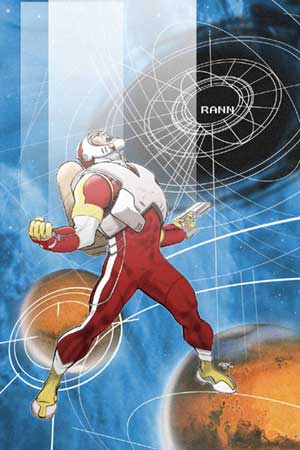 Adam Strange is back in his element, duelling with an alien bounty hunter in a rocket-pack dogfight over Gotham. The highly-kinetic battle, while not exactly the most original, is still one of the best fight scenes in comics in a long time, thanks to Diggle's careful pacing and internal dialogue and Ferry's clean, energetic art style. Adam finally puts on his new spacesuit as he begins his investigation into the whereabouts of his adopted planet of Rann and the creative team reveal just enough to whet our appetites and keep the story moving without cramming too much detail into one issue. This has been one of the best revivals DC has done in recent years, one that stays faithful to the old character while putting him in new and exciting situations. Hopefully, they can sustain this level of quality in the succeeding issues-- without pulling out some cheap gimmick like a gross-out murder sequence or a 'shocking' revelation like saying that Norman Osborne was the real father of Alanna's child.