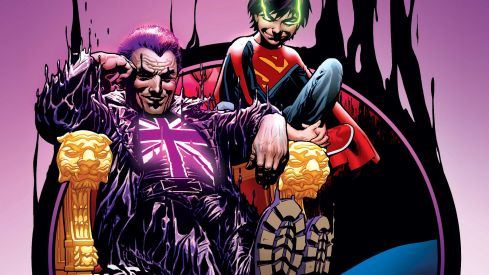 Manchester Black keeps up the pressure on Superboy's soul, forcing him to do battle with his father, but Superboy has strong streak of good in him that can't be quenched so easily.


Peter Tomasi and Patrick Gleason wrap up "Black Dawn" with Chapter 6 "Fade to Black." The gang's all here as all of the heroes that have been kidnapped by the evil telepath Manchester Black engage the villain in battle. Superboy seems lost, but the bond between father and son is strong, especially in the Kent Family. Tomasi and Gleason really know how to write and draw a "blackest night" of the soul story. Perhaps because they were so integral to the look and feel of the DC Comics' event Blackest Night of about a decade ago. "Fade to Black" certainly has the same look as that legendary tale.

"Fade to Black" required two pencillers and six inkers to compete though. While Gleason and Mahnke work well with each other and did their best to create a smooth looking book, their styles do clash and some of the pages and panels feel incredibly rushed. The publication schedule is hurting the continuity of look and quality of art on the bi-monthly books. Books that publish once a month, like The Hellblazer and New Super-Man have a much better look about them.

It's been a year now since DC Comics' Rebirth launched. It has yet to disappoint in any major way and remains a vast improvement over The New 52. With the Kent Family's stint in Hamilton wrapped up tidily, their return to Metropolis will herald a new chapter in the Superman Rebirth saga. Judging by where we've been with this title, where we're going looks pretty bright.