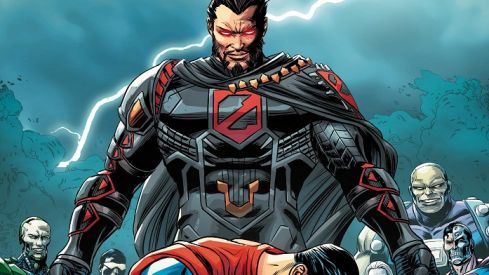 General Zod is freed from Belle Reve prison by new allies Cyborg Superman and The Eradicator and they, after some super villain ego driven squabbling, get down to planning on destroying Superman. Superman attacks first though, even though he's at a significant disadvantage...


Dan Jurgens continues his renaissance of a run on Superman in Action Comics, by resurrecting an old plot line with a twist. Superman has faced "revenge squads" before in his long publication history, but never with the disadvantage that Jurgens builds into this particular story, at least that I can remember. It's a unique development that will add some new complications for Superman to deal with, thus advancing his characterization, something that Jurgens excelled at back during his own personal "golden age" run on Superman in the early 1990s. I just wish that he had something new to offer by way of characterization for General Zod though. He's the same old egotistical jerk he's always been with little to no depth, unlike how he was portrayed in Man of Steel a few years back.

Artist Jack Herbert brings something new to recent artistic portrayals of Superman. Now that the silly "super-armor" is gone, along with its silly collar, etc, it appears that Superman's costume is all a type of cloth again that can fold and wrinkle as Superman moves and flies. It's a little detail, but details matter, and I admire the attention to it that Herbert's art conveys in each and every panel. He also draws some great action sequences that have a strong cinematic feel. Actually, his scenes are more the type that end up inspiring film makers these days instead of  emulating them.

Action Comics remains a strong and engaging DC Comics Rebirth book. Jurgens continues to reinvigorate the character. It's not often that the same writer gets to pop culturally orchestrate the rebirth of a character twice in their career.