It is amazing what kind of changes can happen in just one year's time. Compared to last year's meager showing of games at Fan Expo 2006, this year's showing of three major video gaming tournament leagues under one roof, added to the regular gaming exhibitors like G4 Tech TV and Dork Army, was a mega event. To start, the World Series of Video Games was hosting three different tournaments simultaneously – a Guitar Hero II tournament, a World of Warcraft tournament and a Quake IV tournament – but that wasn't all. Major League Gaming Canada was hosting one on one battles between players from its pro teams and anyone that dared to challenge them – any challenger that managed to get one kill won an MLG t-shirt – and the World Cyber Games held the final for its national championship, hosting the last games on its own stage complete with three giant screens.

The World Series of Video Games tournaments qualifiers began on Friday at 2 pm, two hours before the Fan Expo doors opened for all other attendants, and things started rolling from there. Aside from the current leg of the WSVG tournament series, open competitions were held for those who registered to play. Some players even managed to go up against the pros, either by surviving in the Quake IV arenas, the World of Warcraft 3 on 3 matches, or by putting on a tremendous show in the first rounds of the Guitar Hero II competitions.

Things heated up on Saturday when the pros started taking over, and the audiences were on the edge of their seats, wondering who would make it to the finals. Most of the Quake IV and World of Warcraft matches were held next to the stage, with some being brought up on the main stage for all to see. Those matches were closely watched by those in the stands, some of whom came only to watch the WSVG tournaments. More surprising than the fan reactions at some points though, were those of the competitors, who could be heard shouting and egging each other on throughout each round.

The Guitar Hero II competition had its own share of surprises too, like seven-year-old Sal, who rocked the first day of open competition so hard that he made it through to Saturday and rocked the crowed again by playing Psychobilly Freakout on expert. The biggest surprise out of all three days, though, had to be the argument between team MoB TurtleBeach and team Yea We Lift during the World of Warcraft player versus

player match. At the end of the match on Saturday night, a challenge was made against team Yea We Lift for the use of a non-standard pet for his hunter, and the issue was argued until about 6 am, we were told by one of the WSVG staff. The match was replayed on Sunday morning.

All finals were held on Sunday, and both the teams and crowds were at their maximum volume. Each of the competitions were played hard, but only three players could come out on top. Johan “toxjq” Quick took the Quake IV tournament, taking down Tim “DaHanG” Fogarty in the last minutes of a best of three final. After the hunter dispute

was settled, and the match replayed, team MoB TurtleBeach moved on, only to be taken down by team Pandemic in the final. The Guitar Hero II final ended with a furious showdown between David “MoB WuLFe” Briers and Nikolai “Pandemic-Kov” Shish, which Shish managed to win with a barefoot performance of Push Push (Lady Lightning) in which he signed an autograph while playing.

The only thing that would have made the weekend even better would be knowing that the Toronto leg of the WSVG's tour was part of its regular schedule. After speaking to one of the WSVG staff, we found out that the Toronto visit was not initially part of the tournament schedule, but rather a move requested by Intel, the WSVG's main sponsor. CBS Sports, which regularly broadcasts WSVG events did not even attend. We're sure Torontonians are certainly happy that Intel got Toronto added to the list, we were, but we wonder why it wasn't already there. Maybe this year's strong show of support will get the event organizers thinking about bringing things North a little more often.

Initially planned or not, the weekend was a great success, for the WSVG, its competitors and the fans. There was something there for everyone to see, and plenty of excitement flowing through the air at each of the tournament stages. Who won't remember the intense concentration of the Quake IV competitors as they fought to survive, or the extreme showmanship of the Guitar Hero II finalists, some of whom played blindfolded, one handed or rocked out on the judges' table. We can't wait to see this again.

To find out more about the World Series of Video Games, and to keep up to date with standings, see videos from a number of WSVG events and more, go to www.thewsvg.com. For more information on Major League Gaming Canada, head over to www.mlgcanada.com. You can also find the World Cyber Games at www.worldcybergames.com. 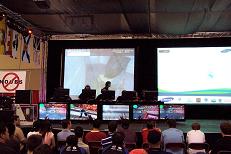