The Pain: When Will It End? by Tim Kreider 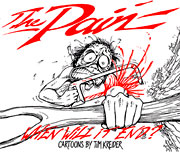 THE PAIN: WHEN WILL IT END? – COLLECTION

The readers of the Baltimore City Paper have been privileged until earlier this year to be pretty much the only viewers of cartoonist Tim Kreider’s uncannily and crazily perceptive visions of modern life. The cartoonist presents his visions in a form used by political cartoonists, the (mostly) single panel cartoon, but Kreider’s politics are of the crude, the crass, the vicious, and the painfully human. Wouldn’t that describe Washington “real world” politics, you might ask? Yes, except Kreider’s cartoons are funny as in hilarious, while governmental politics are funny as in let’s gas the bastards.

Kreider takes the things that give us pleasure, be that food, object, or body part and holds them right out into the center of an unfriendly spotlight. He takes evil and shows it as pathetic, and now matter how evil it or someone may be or how much harm they or it might have done, the pathetic nature of said persons and things are revealed with embarrassing clarity.