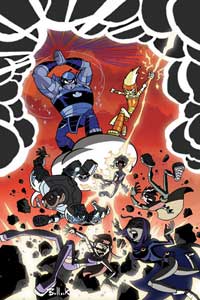 Although many have said it before, it should be said again: TEEN TITANS GO! is DC Comics' doorway back into the hearts of children who will read comics. It's an action comic without being violent. It's an adventure tale with youngsters pounding the crap out of each other without the spirit of the story being overly aggressive and destructive. And issue six's story is like all the others: simply, clean, and self-contained, although the story's conclusion has a too-pat ending.


As an adaptation, TTG! ably captures the spirit of the Cartoon Network's "Teen Titans," series. Regular series creators, Torres, Nauck, and Stuker are in no small measure the reason for this. They consistently produce a comic that reads like something from decades ago without being nostalgic. If there are ever to be comics for kids again, this is the blueprint. And adults may find something in this to like, also. B