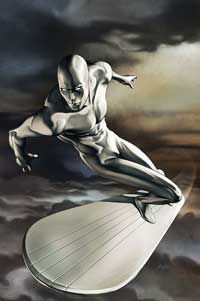 A sign of how unimaginative mainstream comics publishing has become is the existence of such B-character comics as OUTSIDERS, (the upcoming) SHE-HULK and IRON FIST, and I was sure that SILVER SURFER belonged in that group. I, however, am delightfully surprised to be wrong. I never would have bought this comic, but I read it because a shop owner gave me a copy.

It’s a very fun book to read, quite well written with a strong sense of drama, and with a peculiar aroma of combined high fantasy, the occult, and sci-fi. In issue five, the writers have structured the script so that readers can pretty much understand the basic plot and main characters even if this is the first issue they bought. This story arc, “Communion,” is a well-structured serial in which the chapters make you want to read more.

I like pencil artist David Yardin’s work here, but he could use a good strong inker or finisher. I have nothing against Avalon, but computer inking, especially in this case, amounts to little more than tracing. Yardin’s pencils need the touch of a strong, veteran comic book inker who can add texture and depth. There are a lot of good, veteran inkers looking for work. [DRECK, DULL, READABLE, PRETTY GOOD, EXCELLENT]