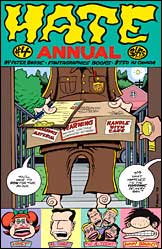 For the last four years, the end of the year brings something we fans of the extraordinary cartoonist Peter Bagge desperately need, a HATE ANNUAL, which is apparently the only continuation we will get of Bagge’s late and oft-lamented hit comic series, HATE. The fourth annual is like its predecessors, a combination of original new commix and reprinted essays Bagge has written for various websites and magazines. This year’s Buddy Bradley entry is funny, even if it’s a little wilted and tad bit formulaic. The gags might be strained, but the cartoonist is as electric as ever as he runs his characters through their conflict-o-rama.

For me the annual’s best entries are the essays. Maybe it shouldn’t be a surprise that a cartoonist who creates the kind of wildly inventive and hilarious strips that Bagge has over his career is also a journalist and essayist of much sass and biting wit, but it is. His disdainful accounts of the 2000 Democratic and Reform Party Conventions are a hoot, but they almost pale next to Bagge’s mini-expose of the beat creators and songwriter/producers behind the late 90’s bubble gum pop conflagration. At $4.95, this is a steal.
[DRECK, DULL, READABLE, VERY GOOD, EXCELLENT]