Hi. Welcome back to Mr. Charlie Opens the Door. This column features an interview with alternative cartooning legend Peter Bagge about his humble beginnings. In fact, this is the first in a (hopefully) long series of columns where comic book creators will talk about their early and formative years. I'm trying to find creators who haven't already had to regurgitate that too many times. It can get old, and Warren Ellis has already told me that he'd rather eat glass than talk about his early days again.

Bagge first drew attention to himself in the mid 1980's with the fabulous comic magazine NEAT STUFF, an anthology series published by Fantagraphics Books and featuring the adventures of a number of characters including The Bradley's, Studs Kirby, and Junior, among others. Although he was already highly acclaimed, it was when he took elder Bradley son Buddy and put him in his own comic HATE in 1990 that more people realized what a unique voice and fantastic cartoonist he was (and still is). 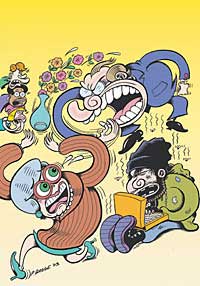 In 1998, he shut down Hate as a regularly published series, in favor of doing it as a series of annuals. He collaborated on YEAH! with Gilbert Hernandez for Homage Comics for nine wonderful issues, but the direct market Hades was indifferent, causing the books cancellation. Sadly, his recent DC Comics series SWEATSHOP suffered the same fate, but when it comes to this immense talent, we keep hope alive that he won't stop cartooning. I'm including an image from Bagge's toy line and images from recent and upcoming work.

Would you mind sharing a little biographical info about your childhood and family?

PB: I grew up in the suburbs outside of New York City. Catholic family, 5 kids. My dad was in the military. Our mom was the world's worst housekeeper. Lots of drunken fights about money. We were the weirdo outcast kids of the neighborhood. I couldn't get away fast enough.

How were you first introduced to comics and what did you read?

PB: I always read comic books. My fave by far was MAD. I also liked "Not Brand ECHHH!" when I was little, and later PLOP. We also always had Harvey and Archie comics around the house. None of us cared for superhero comics, though.

I was more into "funny" daily strips like PEANUTS (my fave), as well as BEETLE BAILEY, B.C., DENNIS THE MENACE, etc. When I got older I got into LI'L ABNER and DICK TRACY. I also loved a kid strip called TIGER. It was really well drawn.

When were you first able to think deeply or examine comics beyond reading them for entertainment, what did you notice about the medium? What professionals caught your attention? 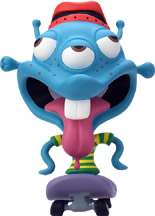 PB: By the time I was a teen I "outgrew" MAD and the daily strips and definitely hankered for more. I really loved the comics in NATIONAL LAMPOON, though I had no idea that was just the tip of the Underground Comics iceberg until I moved to the Big City.

At what point did you start to think of cartooning as a vocation, or was the idea of being a cartoonist something that happened gradually?

PB: Discovering R Crumb's comics (not counting his ubiquitous "Keep On Truckin'" tee shirts) did it for me. That was IT. I was in art school ( School of Visual Arts, ljd) at the time. Undergrounds gave me the nerve to say "nuts to art school! I know what I'M gonna do!" I didn't know that the UG market was dead by then. Oh well.

Were their friends or fellow amateurs who played a big part in your development as a cartoonist?

PB: Yeah, there was a group of cartoonists who put out PUNK Magazine: John Holmstrom, Ken Weiner and Bruce Carleton (the latter two also worked for -- and GAVE me work IN -- SCREW Magazine). They and JD King were my "homies" back then, along with Kaz and several other youngin's. Art Spiegleman also gave me a lot of useful advice back then.

How did you come about co-publishing COMICAL FUNNIES ( Bagge published three issues of CF in 1980-81, first with Holmstrom, Weiner & Carleton and then with King, ljd)? What was the experience like, and what did it do for your growth as an artist?

PB: By 1980 I started to get small strips published here and there, but I wanted to have something longer than 1 page appear in print. Meanwhile, PUNK Magazine had just ended, and John Holmstrom was eager to try something else, so we joined forces and put out CF.

THE COMICAL FUNNIES experience was stressful, but I learned a lot -- mainly that I didn't want to be a publisher! It also gave me a better idea of how my work did and SHOULD appear in print.

What created your elastic, kinetic style? Was it just something in you that was attracted to that kind of big foot (my term) style, and were there any artists who influenced you to draw like that?

PB: I always loved the old Warner Brothers cartoons (especially from the '40s, and especially the ones directed by Bob Clampett), and I always wanted to capture that sense of movement and exaggeration in a static format. In retrospect this sounds like a futile thing to attempt, but I think I wound up pulling it off better than I ever thought I would.

How did the relationship with R. Crumb develop to the point that you were able to become managing editor of Weirdo for four years?

PB: I sent Crumb copies of COMICAL FUNNIES, as well as everything else I did, once he made the foolish mistake of printing his mailing address in the pages of WEIRDO. He always gave me useful advice, and later printed a thing or two by me... When he decided to hire a managing editor he chose me because I seemed relatively sane compared to every one else he knew -- this in spite of the fact that we had never met at that point!

Sometimes mentor and pupil clash, like Miles Davis and Wynton Marsalis, over where the old guy is taking his art. Did you ever have misgivings about what Mr. Crumb was doing creatively at the time you edited Weirdo? If there were, what were they and did you ever give voice to them to anyone including Mr. Crumb?

PB: No, I loved everything he did for WEIRDO at the time I was working on it! I also was impressed that he was still doing a lot of experimenting with his style and such, in a way that's rare for an artist in his 40s to attempt.

How did you connect with Fantagraphics to publish NEAT STUFF? Was getting the book off the ground difficult, or did your self-publishing efforts and previous editing experiences make Neat Stuff relatively easy to produce?

PB: I met Gary and Kim [ Gary Groth & Kim Thompson are the co-founders of Fantagraphics Books, ljd] of Fanta back in late '83, when we all still lived in the NYC area. I approached them about publishing an anthology, but to my amazement Groth suggested publishing a solo comic by me instead! Nothing came of it for over a year, though, because we both moved to the West Coast after that, and it took a while before either of us could broach the subject again.

To close would you like to tell us about your current work and future endeavors. You may also freestyle and say whatever you like. 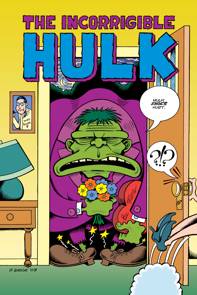 PB: I'm currently working on lots of things: HATE ANNUAL #4 (almost done), a 1 shot HULK ( THE INCORRIGABLE HULK due in early 2004, ljd) comic for Marvel, and I do a monthly strip and occasional feature for REASON Magazine. I also just drew a 1-page strip for SPIN (written by Alice Cooper!), and I wrote a story for the next BIZARRO book that Gilbert Hernandez drew. Oh, and I'm gonna write and draw a story about Jar-Jar Binks for a Bizarro-style STAR WARS book DH [ Dark Horse Comics, ljd] is putting out next year... Beyond that, I've got lots of irons in the fire -- much of it TV-related -- but I hate to announce anything until the ink on the contract is dry to avoid making a fool out of myself.

That's a wrap, and I really appreciate Mr. Bagge's giving his time for this interview. Readers can find a wonderful selection of his books and records at fantagraphics.com for sale. For more info on the cartoonist, Jeff Voris maintains peterbagge.com where you can buy Bagge original art and find out more about him. Mr. Bagge also has a line of Japanese toys that may still be available from kidrobot.com and ningyoushi.com.