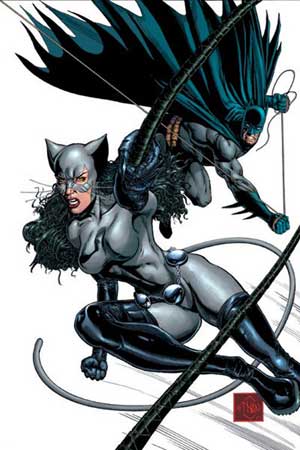 This is the second part of a two-chapter miniseries which has Batman racing against Catwoman and various criminal gangs to obtain a wonder-gun that fires heat-seeking bullets. But as expected, this story also includes a heated discussion over gun-control. Well, it is suppose to be a heated discussion. Maybe Handgun Control Inc. would rave about this book but other people on both sides of the issue may find the story rather preachy. There was an attempt in the first chapter to look even-handed, presenting both sides of the issue but as most of the pro-gun characters are either slimeballs or psychoes, it is pretty clear where the author stands.

Catwoman is the real hero of the story with Batman in a supporting role. But her characterization in this story doesn't quite fit with her other appearances. She is obsessed with getting the gun, even though she herself, has rarely used guns. She is also trying to prove herself to be the new queen of thieves, even if it means working with a bunch of weirdoes who would clearly shoot her dead for the fun of it. The multiple subplots and the long lectures on the gun culture, crammed into such a limited space eventually cause the whole tale to collapse into a mess that is neither moving, illuminating or exciting.

Van Sciver's art is richly-detailed and very exciting in some scenes. But he seems to enjoy making human beings look as ugly as possible, reducing many of the characters into caricatures. But at least his Catwoman is done well as Selina is depicted as sexy, deadly yet very human.
By the way, when you have a gun that fires heat-seeking bullets, then it is the bullets that are special, not the gun.