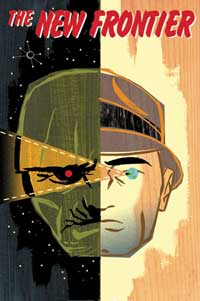 This miniseries tells the story of the origins of the Silver Age DC heroes, set in the actual period when these heroes first saw light. The earlier issues have been inspiring and thought-provoking. In this issue however, Cooke's story begins showing its stretch marks. Basically, the old members of the Suicide Squad embark on a mysterious mission to Mars. Meanwhile, on Earth, Batman and the Martian Manhunter continue their investigations into a mysterious presence that is making people paranoid and fanatical. Once again, we see some noble heroes sacrificing themselves to a higher cause, something we have seen enough of, in the previous issues. There is some great derring-do by the Challengers of the Unknown and a look into the mysterious activities of the government but the plot is still moving too slowly. There is also a tone of smug moralizing in this story about how repressed and backward the 1950s were. Almost as if the writer were deliberately trying to say, "look how enlightened I am, to be criticizing my grandparents." The violent behaviour of Pieface (of all people) was really the last straw. Still, the art remains crisp and exciting while looking distinctively unique. Here is hoping this miniseries really hits a home run in the last two issues instead of slumping like it did in this issue.