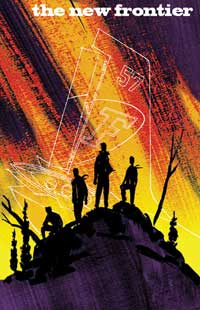 This miniseries tells the story of the DC heroes (super and otherwise) of the late-1950s, set in the actual era in which the original comics were published. The latest issue is easily the weakest in the series so far. The focus is on minor heroes like the Challengers of the Unknown and the obscure ones like the original Suicide Squad and King Faraday. Cooke also shows signs of repeating himself, with one character exploding within the jaws of dinosaur-- again. However the story has its charms, particularly the depiction of the hard-nosed Rick Flagg and the suave but dangerous Faraday. We also get to see Hal Jordan showing that he has "the Right Stuff" and the Martian Manhunter's reflections on America in the 1950s, particularly the fear of aliens. A mysterious new character is introduced-- one not connected to the actual Silver Age and who will obviously reveal new facets of DC's heroes of the 1950s. The story still isn't coming together but it is still filled with some wonderful moments.

One theme that is getting overdone is the dark tone of the stories which seem to assume that the 1950s were the bleakest period in US history. The fear of the Soviets, the anti-Red paranoia, the racist attitudes of the time, are hammered upon excessively. Yes, the 1950s were not the idyllic time depicted in "Happy Days" but they were certainly much better than the depression-- or wartime. If this keeps up, the whole series may end up looking like another one of those revisionist pieces by some smug, self-righteous modern guy, boasting "look how much smarter/ more sensitive I am compared to my parents!" This book is suppose to be a homage to those classic characters of the late-1950s. It would be nice if they could tap into the energy and optimism of the times as well.