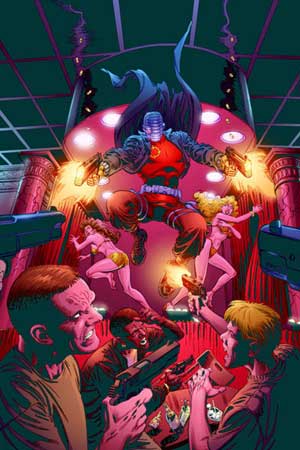 After a stirring first issue, this miniseries starts to hit some speedbumps. Deadshot is on a crusade to clean up a slum where his daughter resides. But there is little sign of planning or tactics. Instead, Deadshot is shown casually gunning down gangsters and dirty cops who don't really put up much of a fight. The art, which is rather static and posed, also doesn't help. The guys being shot dead look silly rather than horrifying or shocking. Deadshot's campaign against slumlords and gangsters also fails to resonate on an emotional level. He ends up looking like a bully who does this for fun despite the attempts to touch the heart of the reader (like using a sick dog and a disabled kid.) The issue ends with a cliffhanger of an impending clash between Deadshot and Green Arrow but even this is set up rather sluggishly. About the best thing about this issue is the cover. If future issues can match the excitement and suspense shown on that cover, then this miniseries will really blow them out of the water.