THE MATRIX RELOADED - A REVIEW BY MATTHEW GREEN 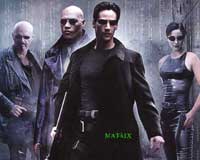 Strap in, this is long.

I'm the biggest fan of the first one. One of my all time favorite movies. So, I went to Reloaded expecting to see, at the very least, a good sequel to a great film. I don't really know what I saw.

The only way I can explain how bad Reloaded turned out to be is that the Wachowskis took a vacation and let two Production Assistants write it and direct it after sitting through Philosophy 101 in some community college down the street. 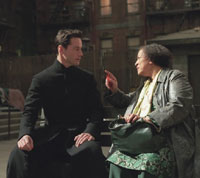 The problem isn't too much talking, as some reviewers have said. The first one had just as much, if not more, exposition. The only thing different about it in Reloaded is that all the dialogue has now become terribly self-important and the framing is identical in every single shot. Put a camera on the wall facing Morpheus or Smith or whoever and marvel at quips such as, "It's not the path that lays before me, but the path that lies behind me." - and - "ZION! HEAR ME!" - and - "Blah blah blah choices blah blah blah more choices blah blah what are choices blah blah repeat ad nauseum". The only good bit of dialogue that the audience could wrap their heads around was when Neo was talking to the Head Councilman in the basement of Zion. That was one of the few moments in the film when I felt like two people were actually having a conversation and not just waiting for their turns to give endless speeches. When Agent Smith first approaches Neo before the Burly Brawl even he has to go on forever about God-knows-what. The audience was visibly getting restless. Not good. 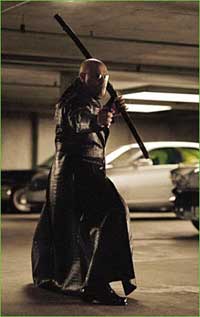 The "Architect scene" at the end with Colonel Sanders felt like the finale of the Wizard of Oz and wasn't any more dramatic. His revelations were so drowned in an endless stream of 10 dollar words that everything he said made the audience shift and strain uncomfortably in their seat, trying to understand exactly what the Hell he was trying to say. I "got it", but the "high dialogue" ruined it for me.

One of my main gripes with Jurassic Park III was that the velociraptors had lost all of their power. In the first one, if you were being hunted by a raptor, it was going to take some sort of miracle to save your ass. It gave the movie a real sense of desperation and fear. In the third one, apparently all it takes is a 10 yr old kid. Suddenly, the film becomes self-parody and loses that critical sense of danger.

Same thing with Reloaded and the Agents. It was explained in the first one that every single person who had fought an Agent had died. Neo could fight them because he was "The One". Fine, understood. But now we see Morpheus and Trinity fighting Agents, even Agents with super advanced ghost-like powers, and succeeding. Plus, they never act like they're in trouble. Watch the scene in the first one when Morpheus battles Agent Smith in the bathroom of the dilapidated apartment complex and gets his ass handed to him. You feel those hits. You wince when his head cracks on the toilet seat. Now, in Reloaded, watch the scene when he's fighting the Agent on top of the moving Semi, a much more dangerous situation, and is fine.

No one acts scared anymore. No one doubts that they might survive. I was on the edge of my seat in every single fight in the original Matrix. In this one, my suspiscions arose only near the end, with Trinity battling the Agent in the skyrise, but by that point, I was so disillusioned I couldn't have cared less if she died or not. In the first one, they kill off half of the team without a word of warning and set the dark, horrific tone for the rest of the film. In this one, nothing like that happens. And when it does at the very end, the majority of it happens off screen and to people we've never seen before. And Neo, the main protagonist and focus of the movie, fights with this karmic cool now that he's "The One", which makes every battle boring and pedestrian, which gets to my next point.

If it was boring or not is arguable as each person sees something different, but by the reactions of the audience I saw this with, the point is valid. And speaking of the audience, I saw it at Wednesday, 10:30 in Los Angeles, California with the biggest room of super-Matrix-fans I've ever seen. They were unabashedly uber-geeks who were so wrapped up in the films, many had brought lap-tops into the theater and were watching the first one before the curtains came up! If any crowd was going to go nuts for Reloaded, it was going to be this one. After the wild applause at the green WB-logo, there was silence. No applause after the fight scenes, a smattering after the highway scene, and moans and groans at the "ending". The majority left, with no intention of waiting around to see the Revolutions trailer. Not a good sign. 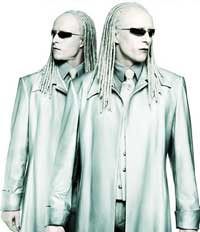 Back to the fight scenes. In the first one, every fight was necessary and felt organic to the story, not forcibly placed to give the attention of the audience a boost. The Seraph/Neo battle felt pointless ("You could have just asked" - Yes, Neo, I agree) and the Burly Brawl was anti-climatic (At the end, Neo just flies away leaving the hundred Smiths to just wander off...um, wow, how unthrilling). Nothing felt neccessary, just a spot to showcase effects. And about those "effects"...

I came to see The Matrix, not Spider-Man. The Burly Brawl feels like its ten minutes long, with five of those minutes being nothing but CG. CG isn't "bullet time", and when they tried to apply bullet time to the CG, slowing it down, it made it look even worse. The Matrix's effects were revolutionary because they used the real actors to perform those moves and those stunts. I found myself thinking, "Wow, that would be cool if Keanu and Weaving were doing those things and not Video-Game Keanu." The flight scenes were amazing, but only when they used the REAL Keanu and kept CG Keanu far away, moving at light speed. When they brought CG Keanu in too close, it lost it's "reality" and sucked me out of the movie. Can't complain too much about the flying, though, because I found it too be excellently executed for the most part. 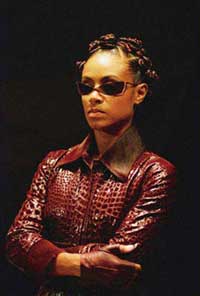 They got rid of Tank because the actor grew a big head after the success of the Matrix. Fine with me, wasn't all that fond of him in the first one. But after I saw the new Operator, Link, I was pleading for Tank to come back. After every cool moment in the film, they cut to Link who says something that's apparently supposed to be "cute" or "funny" when it just comes off as annoying. The best moment in the film, when Neo flies and catches Morpheus and the Keymaker while the trucks collide and explode? Why not cut to Link, who gives a ridiculously stupid touchdown "YES!" When Neo saves Trinity's life, extracting the bullet from her chest? Now's a good time to cut to Link, who says, exasperated, "I can't take this." I was half-expecting him to wink at the FRIGGIN' CAMERA! I hope he gets eviscerated by squiddies in [i]Revolutions[/i] in the first five minutes.

"The Kid" was bad. The Council was embarrasingly bad. Niobe was in it to soley pimp the video game. The "Bomb? Did he say bomb?" scene. The Oracle conversation scene which felt like a parody of the first one ("high dialogue" again - everything was so much more down to earth in the first one). Morpheus has been reduced to self-parody, as has Agent Smith. The Keymaker's facial expressions which made the audience laugh whenever he showed up, even in scenes where it was about life and death. The Cliffhanger was so bad it almost went full circle and went back to good again in a cheesy sort of way (complete with the "BUM BUM BUUUUUUUUUUM!" music cut)...almost, but not quite. 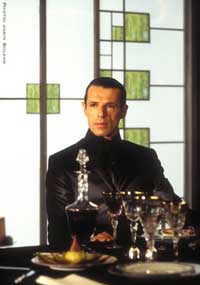 I'm sure I haven't covered everything, but I'm done. I don't want to focus on all the negatives and this was more me venting my rage than trying to accomplish anything constructive. And as much as it sounds like I absolutely hated this film, I was still grateful for any trip back into this world that the Wachowski's have formed and found much to like. Wanna know what I didn't hate?

1. For all the bad press it's getting, the "Rave scene" wasn't that bad and wasn't as long as people are making it out to be.

3. Trinity on the motorcyle with the Keymaker = best sequence in the movie.

4. Trucks colliding and exploding in bullet time while Neo picks up Morpheus and the Keymaker and flies off = best scene in the movie. 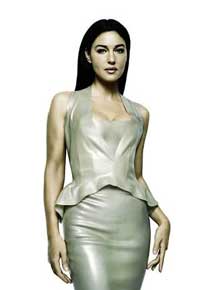 6. The fact that Joel Silver keeps screaming, "It's only half a movie!" gives me hope that Revolutions will somehow fix all of the problems and make both films outstanding. No idea how, but it's possible.

This is also one of those movies that I'm sure I'll grow to love after repeated viewings, so we'll see...