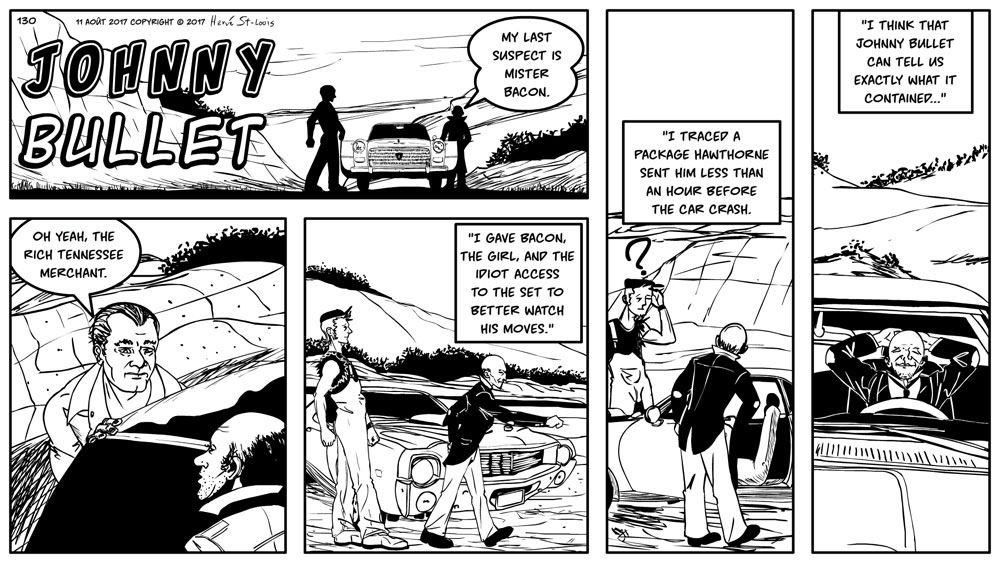 
Hello. In wish that you have had a good week regardless of world shenanigans. For what matters, I believe the nut job in North Korea will not pull any trigger. He’ll be the sane one (not that it is comforting). On to better things.

This is the final page about who could have killed Doug Hawthorne. So we have all seven suspects now. What I want you to do now, is send me a note at johnnybullet@toondoctor.com telling me which one of the seven murdered Doug Hawthorne, Johnny Bullet’s mechanic.

Anyone who sends me a suggestion and a brief line of why they think the person killed Doug Hawthorne will get the revamped Johnny Bullet #1 comic (in English or French, as they request). I’ve been actively updating all previous Johnny Bullet pages. The first 22 pages were completely re-lettered, many panels redrawn, there were many changes and additions on the dialogue. I leave the originals from the webcomic here as a copy of the what was originally posted but for the print and digital comics, I update everything constantly.
That comic is already on sale here at the Bin but you can get for free just by participating in this cool exchange.

The main comics that cover the seven suspects are Johnny Bullet #124-130. But of course, you are encouraged to reread the entire comic and see if you can get more clues about who did it! Here are the exact names of the people covered by each strip.


Send me your responses before Sunday August 20, before 12:00 am. I spent all of today drawing next week’s comic, so it will appear on time. I hope that you do enjoy next week’s comic. It’s the best that I have drawn so far and Detective Barbary does arrest someone!

Thank you for reading this!